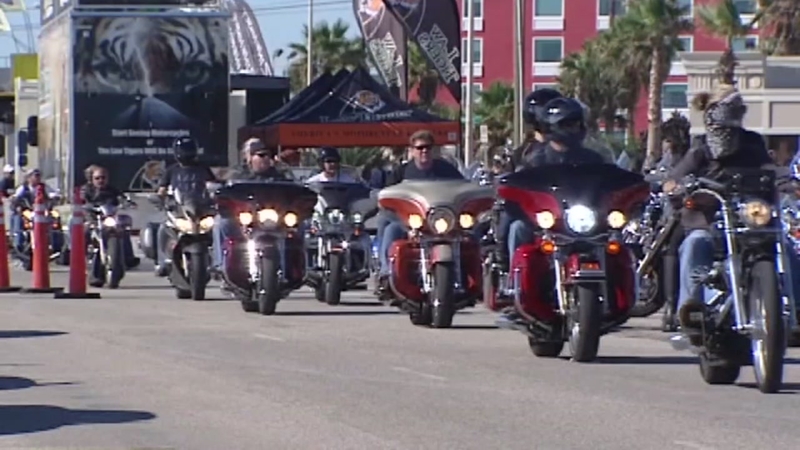 Bikers pour into Galveston for Lone Star Rally this weekend

GALVESTON, Texas (KTRK) -- It's going to be a busy weekend in Galveston as bikers from all over pour into town for the annual Lone Star Rally.

It's the largest four-day bike rally in America. The big event on the island begins on Thursday.

Around 250,000 motorcyclists are expected to be in the area for the rally. The event is expected to bring $115 million to the city.

There are several street closures to know about, including portions of Seawall Boulevard, Strand, Harborside and Mechanic.
More street closures include 24th Street, 23rd Street, 22nd Street, 21st Street, and 20th from Market to Harborside. All areas will reopen on Sunday evening, Nov. 4.

You can easily access the activities on the seawall and downtown using the Galveston Trolley.

The Galveston Trolley will offer a special event route designed for the Lone Star Rally to connect from downtown activities to the Seawall. From 1 p.m. to 11 p.m. Thursday to Saturday, there will be trolley service running along 25th Street. The pickup and drop-off points are at 25th and Strand, and 25th and Seawall. The trolley costs $1 and runs every 30 to 40 minutes.

How to stay safe during the Lone Star Rally

According to TxDOT, more than 500 motorcycle riders were killed in Texas last year, so here are some precautions for everyone in some of the riskiest driving situations:

Give motorcycles a full lane
The fact that motorcycles are smaller and harder to see means they definitely need the extra space.

Double check your side windows and mirrors before changing lanes

Small vehicles like motorcycles have a greater chance of getting lost in your blind spot.

Avoid lane splitting
Riders should avoid weaving in and out of traffic. It's an appealing way to bypass congestion, but it's also an easy way to collide with a car.