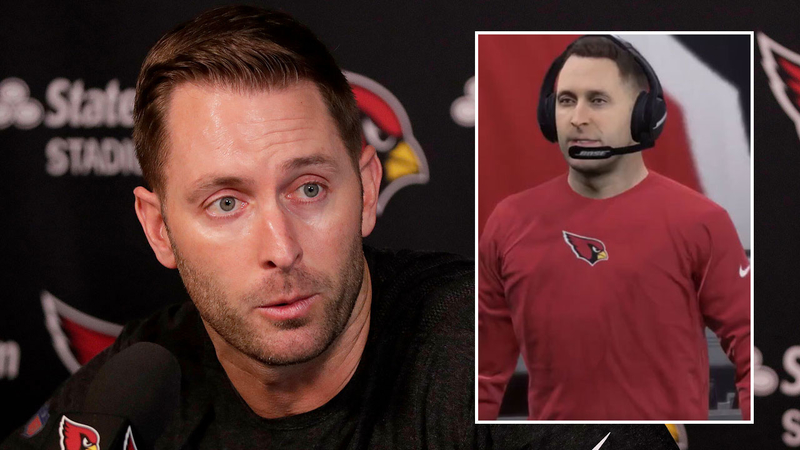 Cardinals coach thinks he is zombie-like in Madden '20

Days before Madden '20 is set to be released, one NFL head coach says he now understands why so many players around the league are upset with their ratings.

Kliff Kingsbury, new head coach of the Arizona Cardinals, says he wasn't a fan of what game makers did to his face, according to a tweet by the team.

In fact, the coach whose likeness has been compared to that of actor Ryan Gosling, said he thinks he looks like a zombie in the game to be released Friday, ESPN reports.

"I had seen a bunch of guys kind of getting in their feelings about their ratings and then somebody sent me a picture of what I look like on there," Kingsbury said. "I want to get adjusted on looks rating. I look like I'm on 'The Walking Dead' in that picture."

"I saw my picture on there, and I'm not pleased with where we're at."

In past years, we've seen other NFL athletes take issue with their own appearance in Madden games.

Before Christian Covington left the Texans for Dallas, he called his doppleganger in Madden NFL '19 "ugly."

Deshaun Watson fans watched as the Texans QB's ratings dropped from 86 to 82 in the year between Madden NFL '18 and '19's release.

Kingsbury now feels their pain and that of other NFL stars apparently done wrong by EA Sports.

"So, yeah, I apologize to any of those players that I thought, 'Hey, it's just a video game. Why are you upset?' Because I saw my picture on there and I'm not pleased with where we're at. So we'll have to work on that."
Report a correction or typo
Related topics:
sportsarizonavideo gameu.s. & worldarizona cardinals
Copyright © 2022 KTRK-TV. All Rights Reserved.
TOP STORIES
Daylight shows home destroyed after standoff with shooting suspect
What we know about man accused of shooting 3 HPD officers
Suspect arrested after 30-minute chase ends on I-45 in Texas City
Clouds clearing today, sunny through the weekend with rain next week
5 people charged in connection with Pct. 5 corporal's murder
How many times can I reuse my N95 mask?
Decades after TV anchor disappears, convicted rapist denies connection
Show More
Driver dies after slamming into 18-wheeler's trailer on US-59
Woman shot in the shoulder during robbery set up in SW Houston
Prepare for a major closure at I-69 and 610 West Loop this weekend
Officers escort body of corporal killed in ambush to funeral home
ABC13 obtains HPD scanner traffic of chase that led to shootout
More TOP STORIES News