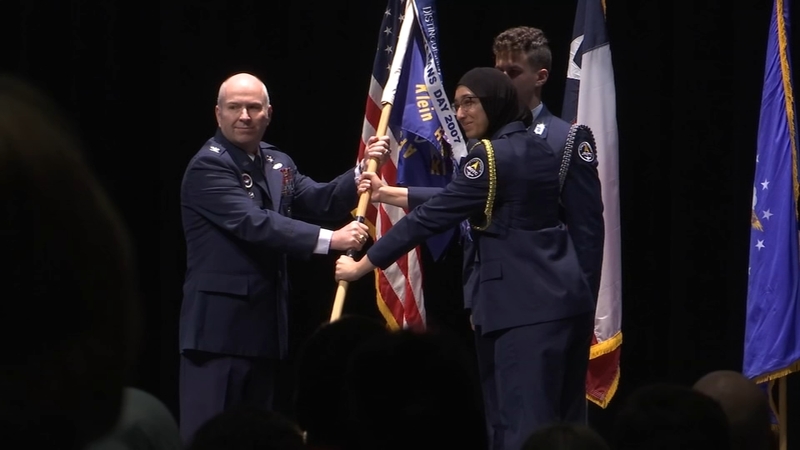 KLEIN, Texas (KTRK) -- The next guardians of the galaxy could be coming from Klein High School after the district rolled out the state's first Space Force JROTC.

On Tuesday, the military branch held a conversion ceremony. Now, 118 Klein High School students are a part of the first Space Force JROTC.

"I'm really honored to be in something so historical, in something like the Space Force. Especially when it's something, when there are only 10 in the country," Space Force JROTC Major, Samantha Taylor said.

The historic move was nearly a year in the making. In early 2021, the school's chapter was named to the inaugural cohort of the Space Force JROTC after being selected by the U.S. Air Force.

Congratulations are in order...Klein High School AF JROTC has been named to the inaugural cohort of Space Force JROTC. This elite national selection is representative of the leadership and dedication of the entire unit! 🎉 @BrandonBaker31 @LtColLambert @KleinISD @KleinISDJasmine pic.twitter.com/IUGHBcuzvo

Units chosen for the Space Force JROTC conversion needed to be in good standing, close to space facilities like NASA and be top performers.

Just call them the guardians of the galaxy! Klein High School's Air Force JROTC just made an historic transition. Here's why they're now part of the Space Force.

Space City could get more JROTC programs in the future. Military members at the ceremony say it's something they're working on.

"We want initially want to get this right," Space Force, Chief Major Sgt., Karmann Pogue explained. "This school will establish the foundation. I would say, yes. There is always an opportunity and plan for other high schools in Texas to be part of this Space Force Junior ROTC program."

The announcement came just a few months after Space Force celebrated its first birthday back in December.

"It is definitely an honor to be chosen to be one of 10 inaugural Space Force JROTC units," said Lt. Colonel Timothy Lambert in a statement.

Space Force is the newest formed branch of the military. It used to be under the Air Force, but then under the Trump administration, it was made into its own entity.

Space Force focuses on issues like cyber security and keeping our satellites up and running out in space. It also focuses on monitoring the integrity of our cellphone communication, making sure that is not hacked. It's an opportunity for Klein High School students to learn more about our military.

"We've got to look at things a little differently than how I grew up," Pogue said. "Then how we all grew up. It's taking a different approach to be bold to have the courage to tackle problems in a different mindset."

The Space Force is not designed or intended to put combat troops in space.

"It leaves a little bit of anxiety sometimes because, what did we get ourselves into? What's that going to put on our shoulders? Our cadets have always performed really good. It gives us another target, I guess, to really achieve what is expected of us now," Lambert said.


"I am super excited for the Space Force program. I'm excited to be a representative to make a change, to expand our program, to incorporate new information, and to possibly serve our community more by expanding our service project aspirations," said student Alissa Zenero last April.

Klein High School joins other schools from places like Las Vegas, Phoenix and Arlington, Virginia, in making history as the first JROTC programs to make this transition.