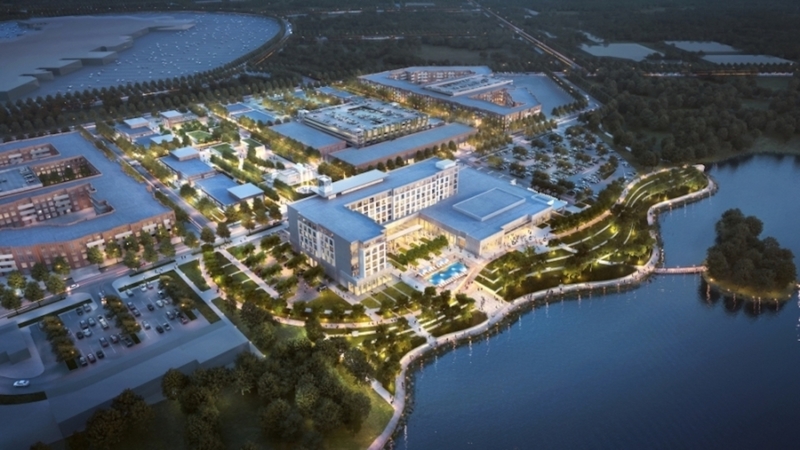 KATY, Texas -- The video above is from a previous story.

Even during the pandemic, Katy Boardwalk District projects did not stop, Katy City Administrator Byron Hebert said. The project was first discussed in October 2015. Once completed, the district will be located off Kingsland Blvd., south of Katy Freeway near Katy Mills. It will feature a nature preserve, multifamily housing, and a hotel.

"The Katy Boardwalk District will be a game-changer for the area," said Keith Dalton of KBH Ventures, the development team behind the district, in an email. "As a new lakefront destination, Katy Boardwalk District will be master-planned as a hub for entertainment, community, and culture anchored by the area's first full-service conference center hotel."

The district will boast 155,000 square feet of retail, dining, and entertainment space and about 60,000 square feet of office space. The city of Katy is working with KBH Ventures, the Katy Development Authority, and the Katy Management District to bring the project to fruition. Katy Development Authority manages the projects, while the Katy Management District maintains them, Hebert said. Despite hurdles, the project has remained largely on track.

"As like with everything else, the pandemic presented some challenges that we had to work through-but we kept the project moving forward," Hebert said in an email.

The development of hotels paused during the pandemic as hotel operators began to rethink the design of their conference center properties, Dalton said.

"As a result, the hotel and conference center at Katy Boardwalk District will be one of the first built in Texas after the return of activity following COVID-19," Dalton said.

Additionally, Hebert said the first phase of the trail system around the district's 90-acre nature preserve has been completed, with the second phase also under design. The second phase will complete the trail system around the 80-acre lake. The preserve will showcase the region's native trees, flora, and wildlife, Dalton said. Additionally, it will offer a viewing platform for visitors.

"Once phase two is complete, wooden boardwalks and other pedestrian-friendly pathways will wind through the entire development to create a truly authentic experience," Hebert said.

"The impact of COVID-19 forced restaurants, bars, and other entertainment destinations to pause any new projects and, in some cases, redesign their experiences," Dalton said. "However, efforts will soon be underway to discuss opportunities at Katy Boardwalk District with potential tenants."

Boardwalk Lofts, the district's residential element, is set to open in late summer, with preleasing starting in July. The complex, developed by Sueba USA, will feature one-, two- and three-bedroom floor plans tailored to active working professionals, Dalton said. Hebert said the city plans to coordinate the opening of the nature preserve, phase one with the opening of Boardwalk Lofts.

As for the long-awaited conference center, progress is being made-but much of it is behind closed doors. According to Dalton, the hotel and conference center brand will be announced as soon as an agreement is reached.

"Our goal is to align with a trusted, well-known, and highly regarded brand that will attract meetings, leisure travelers, and events," Dalton said.

Regarding the next steps, the city will continue working toward completing the trail and road systems. The Katy Development Authority is working with KBH Ventures, and any future agreements or amendments would require approval from Katy City Council.

"Boardwalk Lofts will play a key role in creating a vibrant setting for the project when it adds its restaurant and retail offerings," Dalton said.