John B. Kennedy's client did not suspect his disbarment until he became 'generally unavailable' 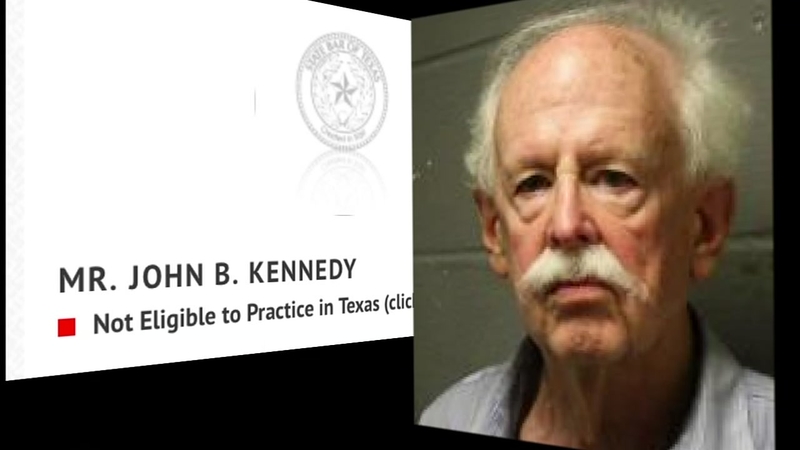 HOUSTON, Texas (KTRK) -- John B. Kennedy made his initial court appearance Friday afternoon, not as a lawyer, but as someone accused of pretending to practice law.

The 73-year-old parolee and former lawyer is accused of the same crime he pleaded guilty to in 2009.

RELATED: John B. Kennedy accused of practicing law without a license for second time

After a bout of food poisoning sent her to the hospital, Shanda Sanders came across Kennedy's advertisements of his law firm. She hired him, believing he was a legitimate lawyer.

"I did, I really did," she said. "There was nothing that told me he wasn't one, so I would have never thought he was disbarred already."

Sanders did not know that Kennedy was disbarred in the 1990s or that he admitted guilt to the phony attorney case. He was sentenced to 10 years in prison and is currently on parole.

Sanders realized something was wrong when Kennedy did not return phone calls and was generally unavailable.

"I actually called the people with food poisoning case with, and they told me the case had been settled months ago, so I couldn't believe it. I didn't sign paperwork," Sanders said.

The restaurant told her the case was settled for $5,000, but she never saw the money, she said.

During this time, owners of a nearby business says Kennedy was harassing them. Ashley Sanders, who is not related to Shanda, owns a clothing boutique and hair salon next door. She says Kennedy would regularly try to block her parking spots.

Surveillance video obtained by Eyewitness News shows Kennedy pushing a shopping cart in front of the boutique and also messing with the plants nearby.

Friday afternoon in probable cause court, Kennedy was given a $5,000 bond for one charge and a $2,500 bond for another case. Eyewitness News also made contact with Kennedy's son, who says his father has been estranged from his children for years.