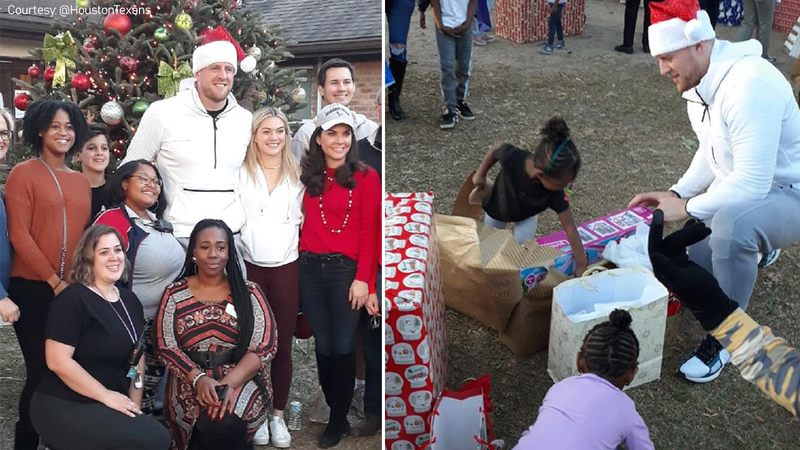 The Mission of Yahweh shared that Watt and Ohai stopped by the shelter on Dec. 23 to bring much-needed shoes for all 130 residents and gifts, which included iPads, robes and slippers, from each person's wish list.

Everyone was also treated to a Chick-fil-A dinner.

"It's the holiday season. We heard all about you guys so we wanted to do a little bit of our part and we wanted to bring you guys some Christmas gifts," Watt said to the residents during the visit.

The star defensive end explained that they received the wish lists, and then they tried to add a personal touch, by gift wrapping the presents themselves.

"We wrapped them and stuffed them all ourselves, so if the wrapping is bad, that was me!" Watt laughed. "I was learning as I went. I'm not very good at wrapping big presents, so I tried."

The Mission of Yahweh is a faith-based shelter that has worked since 1961 to help homeless women and children. At the shelter on 10247 Algiers, the group offers programs aimed at changing lives by providing financial and job readiness skills, spiritual counseling and community outreach. They also have case managers who help residents set goals. Women also need to save 50% of their income, so that they have something built up financially for when they do leave. All other needs are met.

Donor Relations Manager Tammie Jeffers says they help a variety of women, including some who came to them after years of being in domestic violence situations and are no longer in that position, but still had to leave friends and family behind. The shelter cannot accept women currently running from domestic violence. Others are dealing with medical issues, or even have multiple degrees, but have found themselves in a place in life where they need help.

That's where donations like those from Watt and Ohai can come in to bring hope.

Jeffers says one of the biggest needs is shoes, particularly athletic shoes for women and children.

"When mom shows up and they don't have anything, we have someone who helps them find things, and it's horrible to take them over there (to the shelter's House of Hope shop) and not have their shoe size," Jeffers told ABC13. "Kids go through three pairs a year, and we have 58 children."

Jeffers explains Watt and Ohai heard about The Mission of Yahweh and their need for shoes for the residents. She adds $125 was slated for each resident this year, and some of the items on the wish lists were out of that range.

"This year, for some reason, we were running really low on shoes " Jeffers said. "Once they learned of the shoe need, they actually asked about their Christmas wish list that wasn't in our budget."

The Mission of Yahweh is supported by individuals, businesses and foundations but does not receive government funding, Jeffers says.

Watt and Ohai spent about two hours with the families, leaving one woman in tears. "I got an iPad! I wanted one of these for so long," one resident said.

"This is so much more than we could have ever expected," Jeffers said.