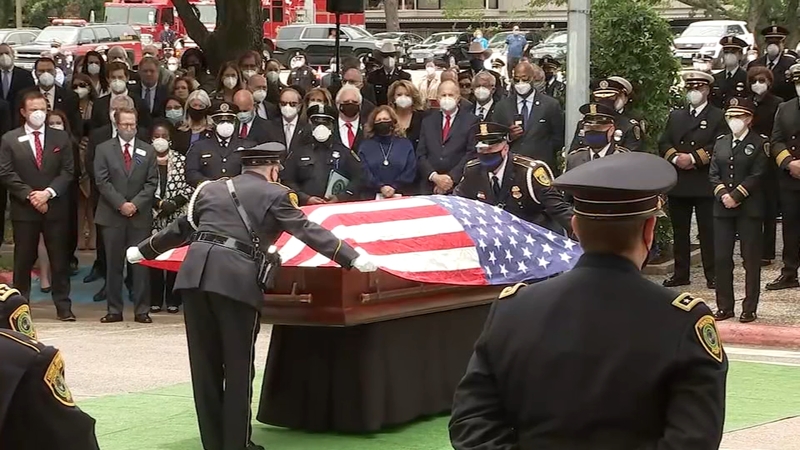 HOUSTON, Texas (KTRK) -- A year has passed since veteran HPD officer Jason Knox was lost when the police helicopter he was aboard crashed into a north Houston apartment building.

Knox was the tactical flight officer on board HPD's 369E MD helicopter along with pilot Chase Cormier searching for a possible drowning victim in Greens Bayou when the aircraft went down in the early morning hours of May 2, 2020.

Police Officer Jason Knox was killed in a helicopter crash in the 17050 block of Imperial Valley Drive at about 2am.

Officer Knox had been with HPD for 8 years. The pilot suffered severe injuries. pic.twitter.com/2osjtOd5jy

Cormier survived the crash, but was critically injured. Witnesses credited his skills as a pilot for missing occupied apartment units when the helicopter made impact.

"Whoever was flying the helicopter did a pretty good job of avoiding killing anybody," apartment complex owner Steve Moore said at the time. "The helicopter actually hit the office and ended up partly in the pool."

A close friend of Cormier's told ABC13 in 2020 that, after surgery, he asked to make sure his partner was okay and to thank everyone who worked to save him.

Cormier later medically retired from the department, according to a profile on Facebook.

A year later, Knox is still remembered for his love of family, cars and the Houston Police Department.

He was an eight-year veteran of HPD. He joined the HPD Air and Marine Division in January 2019. Prior to that, Knox served as a Harris County deputy constable.

The NTSB has not released a final report on the crash investigation.

The video above is from Knox's May 2020 funeral.

"Through his love for people, the people in this city loved him back," Turner said.

"His love for this department extended to the past, to the present and to the future," Acevedo said.

Friends and colleagues of Officer Jason Knox speak at his funeral.

The 90-minute funeral service for Houston Police Officer Jason Knox on May 9, 2020.