Federal prosecutors allege Brian and Adam Jackson hurled a flagpole and other objects at officers during the U.S. Capitol breach.
KTRK
By Pooja Lodhia 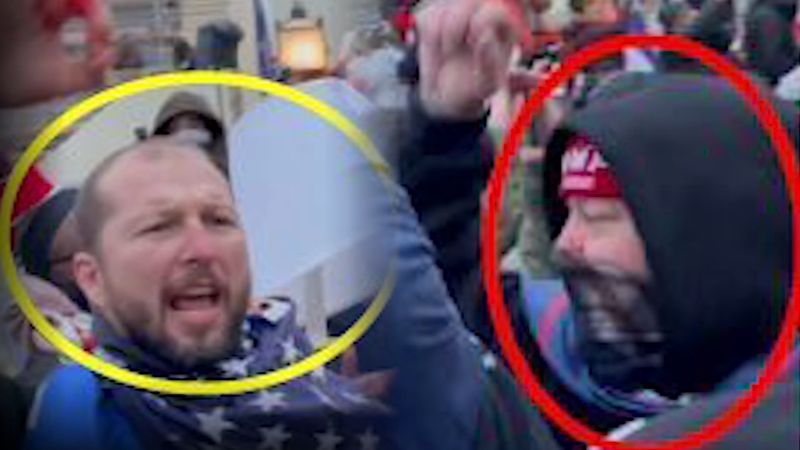 HOUSTON, Texas (KTRK) -- Two brothers from Katy, who are accused of hurling a flagpole and other objects at officers while the U.S. Capitol was under siege on Jan. 6, 2021, were ordered to be held behind bars without bond.

Brian Jackson, 47, and Adam Jackson, 42 appeared in a federal courtroom in Houston for a detention hearing on Thursday. Just two days earlier, federal law enforcement took the brothers into custody at their homes in the Katy area.

They each face a count of assaulting, resisting, or impeding officers, civil disorder, and other related offenses, according to the U.S. Attorney's Office for the District of Columbia.

There were as many as 30 family members, friends, and associates supporting the Jacksons in court, where Magistrate Judge Andrew M. Edison called the pair a "threat to the community."

Jacksons' supporters were openly emotional, with some family members crying and yelling "I love you" as the brothers were seen out of the courtroom.

Outside of the proceedings, supporters appeared to be combative with media members.

Adam Jackson cried multiple times in the courtroom as his attorneys talked about his six children and fiancée.

Extra security personnel was needed inside and outside the federal courthouse.

The Jacksons' defense team argued that the brothers may not be the same guys that the FBI was looking for when the agency released photos claiming to be of the pair. They pointed out that more than 20 friends and relatives had submitted letters to the court, pleading for both men to be released.

One picture allegedly shows Brian hurling a flag pole at officers, who were trying to hold back the crowd. In another picture, Adam is seen holding what appears to be a U.S. Capitol police riot shield.

Investigators said a voice is heard saying, "Adam got a g----- shield. stole it from the f---- popo" in a now-deleted video from one of the brother's Facebook pages.

An FBI agent testified Brian attempted to delete his online documentation and participation in the riot and sent several messages asking others to delete videos and messages he sent.

When contacted by phone Tuesday, a family member denied the allegations saying, "My family knows they're innocent and that's all that matters."

If convicted, Adam and Brian's felony assault charge could land them up to eight years in federal prison.

After nearly a year of investigating, the committee working to get to the bottom of the January 6 insurrection at the U.S. Capitol is set to share what they have found out so far.