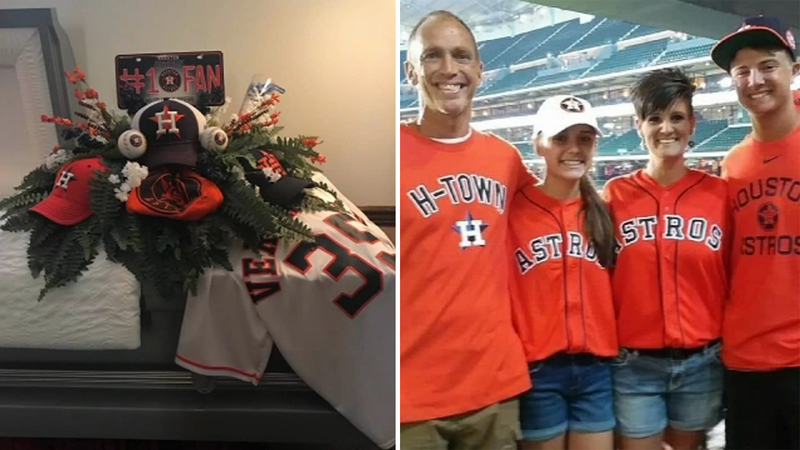 HOUSTON, Texas (KTRK) -- Jamey Joseph's man cave is an Astros fan's dream. He has an amazing collection, from jerseys to signed baseballs and even an original Astros World Series ring.

Going to see the 'Stros has become a family affair for the Josephs.

Just a few days ago, Joseph was browsing through a Facebook group called "Houston Astros Nation" when he came across a picture.

"It hit me kind of hard," he said. "I saw a casket layered with Astros stuff."

It was Harold Westfall's casket, a former Houstonian who lived in Arkansas with his family.

Jester uploaded the photo to the group to show Houston how much her husband loved the team.

"He would tell me stories like, 'Babe, I stuck with them when they only won 50 games that season,'" she said.

After Joseph saw the casket photo, he clicked on Kristie's Facebook page. There, he saw the Westfall family all dressed in orange at Minute Maid Park.

"I automatically knew I was going to give four tickets to her," said Joseph.

"I thought he was joking," said Jester. "I cried like a baby."

Jester was speechless and never imagined total strangers would care so much. Her husband died of a heart attack and she didn't get to say goodbye.

"I think just being there might give me peace that he is gone," she said.

"I just thought it would be the best thing for them to start the healing process. I know he's going to be happy," said Joseph.

Here's what time the Astros play their first 2 playoff games