Kim Paradise was giving her baby medicine and just left the room when the ice seemingly fell from the sky.
KTRK 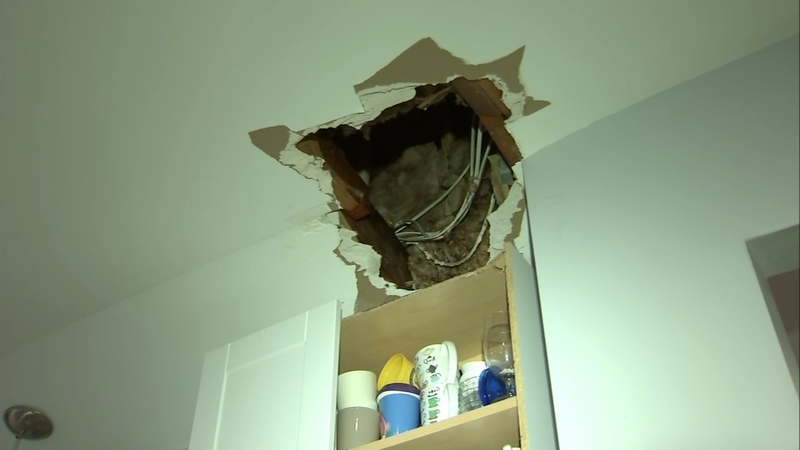 NJ family says ice crashed through home: 'It was like an explosion'

MARLTON, N.J. -- A New Jersey family said they're still in shock after a large chunk of ice seemingly fell from the sky and crashed into their home, leaving a gaping hole in their roof.

Kim Paradise said she had just given medicine to her baby and walked out of her kitchen when she heard a loud boom coming from the room around 6 p.m. Thursday.

"We heard something come through. It was like an explosion," said Paradise, who lives in Marlton, a suburb 15 miles east of Philadelphia.

She checked the kitchen and saw a giant hole in its ceiling, along with lumps of ice, splintered wood and roofing material scattered across the floor. The crashing ice even ripped a kitchen cabinet door off of its hinges.

A family in Marlton has a chunk of ice go through their roof tonight. Seconds after a mother and baby were standing there. @6abc pic.twitter.com/IS6L2BGV7n

The homeowners found more ice inside and outside of the property.

"There's ice outside on the grass. There's ice in our backyard, on our roof," Paradise said.

The family suspects that the ice fell from a passing airplane, but it's still unclear what exactly happened. Our sister station WPVI reported that two flights were in the immediate area at the time of the incident.

Paradise said she's just thankful no one was hurt.

"How lucky we are. My son's a little fighter. He actually has escaped a couple of different times fighting for his life, and I think someone is actually watching over him at all times," she said.