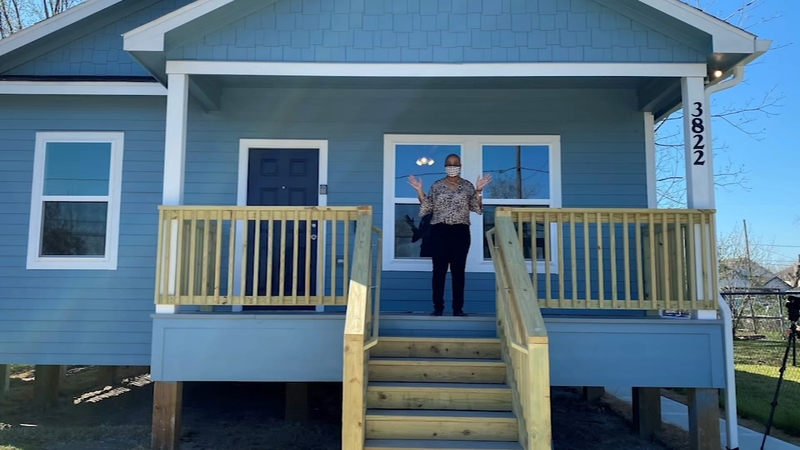 HOUSTON, Texas (KTRK) -- Every day for the last two months, Clara Logan spent her evenings sitting in the parking lot of the church across the street from her Fifth Ward home.

It went from a pile of rubble, to a clean slate and eventually a four-bedroom, two-bathroom home painted baby blue.

It took just two months for construction workers with the Texas General Land Office's Harvey recovery program to build the home and during that time, Logan wanted to get used to the feeling of walking into it for the first time without her husband.

"Right now I just want to get used to being in the house. I have to get adjusted to the new house and just being here with just me and my kids," Logan told 13 Investigates.

More than four years after Hurricane Harvey made landfall and tore through southeast Texas, one of its victims is finally getting her home repaired. Hear her emotional reaction in the video above.

Logan and her husband Kenneth dreamed of rebuilding their home after Hurricane Harvey flooded it in 2017. They were among thousands who applied for the city of Houston's Harvey Homeowner Assistance Program.

But more than two years after the storm, the state GLO, which granted the city the ability to administer its own recovery program using federal funds, took over Houston's program due to slow progress.

On April 22, 2020, the GLO sent a letter to the city saying it "can no longer allow the City to hinder the progress of recovery efforts for Houston residents."

After years of waiting for help, Logan said she received an email on Jan. 28, 2021, saying her application was transferred from the City of Houston to the GLO. She said she was skeptical at first, but she wanted to fulfill her husband's dream.

On January 14, Logan's home was demolished so the GLO could build her a new home elevated to help protect the home from future floods.

Although it was a bittersweet day, the nights Logan spent in the parking lot across the street prepared her for the emotions of moving in without her husband.

"I actually was visualizing him standing there as I opened that door. He was standing on the inside. That's what I was seeing," she said. "He's in here, he's waiting for us to come home."