Harvey victim finally gets help 1,600 days after the storm 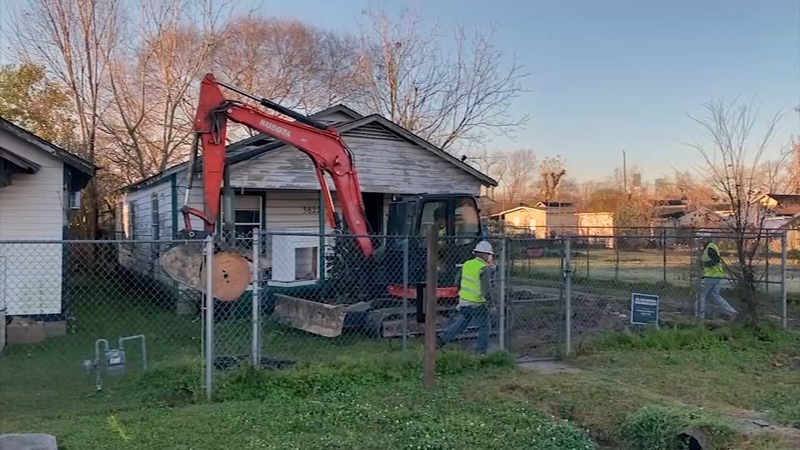 Harvey victim finally gets help 1,600 days after the storm

HOUSTON, Texas (KTRK) -- Clara Logan stood across the street from the home she's lived in for 25 years while construction workers parked a bulldozer in her front yard.

Logan watched intently, with tears forming in her eyes, as the bulldozer clawed away at her Fifth Ward home's roof.

"As they were tearing it down, it was history," she said. "Going back in time, all the way from my dad, to my husband. Kids playing in the rooms, outside, everything. It was like a whole movie was just playing."

It's been 1,600 days since Hurricane Harvey made landfall and flooded her home in summer 2017. It flooded again when a pipe burst during last year's freeze.

Logan and her husband, Kenneth, dreamed of rebuilding their home. They were among thousands who applied for the city of Houston's Harvey Homeowner Assistance Program.

But more than two years after the storm, the GLO, which granted the city the ability to administer its own recovery program using federal funds, took over Houston's program due to slow progress.

On April 22, 2020, the GLO sent a letter to the city saying it "can no longer allow the City to hinder the progress of recovery efforts for Houston residents."

The slow spending was criticized once again in an audit released this month by the U.S. Department of Housing and Urban Development.

Those projects are separate from the homeowner projects meant to help residents like Logan.

After years of waiting, Logan said she received an email on Jan. 28, 2021, saying her application was transferred from the City of Houston to the GLO. The GLO said it was ready to move forward with construction eight months ago, but needed the city to approve building permits and utility shut off to get to Friday.

Within an hour of the demolition starting, Logan's tattered and weathered-worn home was a pile of rubble.

"This was something that needed to be done. We really didn't have - wasn't living there but on prayer and grace. That's it. Because the house really was giving up. It was giving up. It stayed as long as it could," she said. "It's gonna be hard, but it'll be bittersweet because we know that this is what my husband wanted."

The GLO tells us Logan's home should be ready by spring. Although Logan wasn't able to save the trees and garden her husband planted at their old home, she's looking forward to a new start after 1,600 days of waiting.

When we asked her who was to blame for the years-long wait to rebuild, Logan said "Not today. They know who they are, but we won't talk about that today."