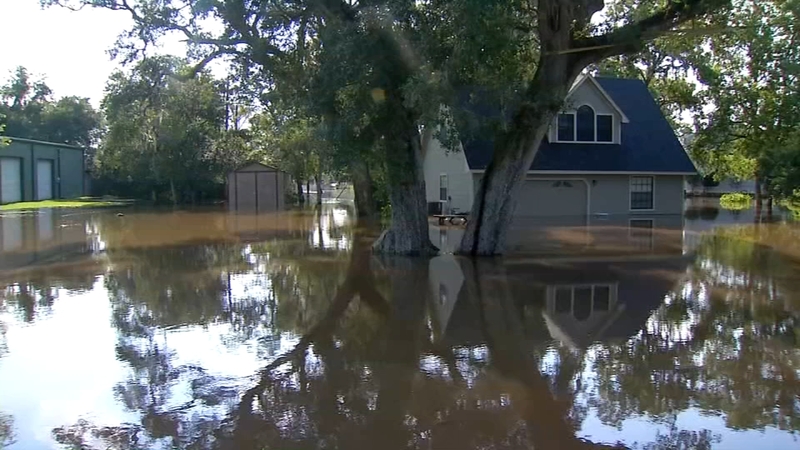 HOUSTON, Texas (KTRK) -- With the two-year anniversary of Hurricane Harvey days away, Houston's mayoral campaign is taking a turn towards flood protection.

Monday morning, candidate Bill King released a detailed flood mitigation plan. As he prepared to release his detailed plan to prevent flooding in Houston last week, King laid face down on a southwest Houston street and stuck his whole head in an open manhole cover to get a close up look at what he said is part of the problem in this city.

In the video posted to his campaign Twitter feed last week, King claimed part of the drainage pipes at that location never finished construction and the ones that were complete are partially clogged with sand and silt.

"This, folks, is why we keep flooding in Houston," King said, standing next to the open sewer drain. "It's not an impossible problem to stop. We have to have the will to do it and start spending all of the drainage fee on drainage."

King, who is making his second run for Houston mayor, says his seven-point flood mitigation plan starts with spending the aforementioned drainage fee on drainage. The fee paid on Houstonians' water bills has been collected since 2013.

Buzbee too says drainage fee diversions should stop. "The drainage fee was approved under the premise that it would be used to fund drainage improvements and pay down past drainage debt," Buzbee writes. "These should be the only items on which these funds are spent. Even then, we need to focus on actions that will have an immediate impact on sheet flow control over paying down debt."

For years, critics have questioned city spending on projects aside from drainage. Under Mayors Turner and Parker, drainage fee collections have been spent on public works salaries and other projects.

King's plan would put the drainage funds in a lockbox. Expenditures would require council approval under his plan.

Buzbee says dollars spent by developers on flood abatement could be deducted from the project's future drainage fees. Under a Buzbee administration, projects that spend 15% or more of the total cost on flood control measures would go to the head of the permitting line.

King would insist on new construction being elevated above the 500-year flood plain. The City of Houston passed similar rules in April.

Looking at future floods, King and Buzbee both suggest the time to plan is now before the next flood so details will be in place before the rain starts. Some federal rules make that improbable as federal rules are currently created for every federal disaster appropriation. Both point out money takes too long to get to victims and millions remain unspent from previous storms.

13 Investigates has heard from numerous Harvey victims concerned help is too hard to get:


King's entire plan is posted on his campaign website.

Buzbee's plan is posted on Big Jolly. Incumbent Mayor Sylvester Turner leads his Twitter feed with a video about his SWAT projects.

It is in addition to the millions in capital projects on larger drainage issues.

Turner has also said the city-led disaster recovery program takes too long to get to victims. Turner has blamed federal rules and state bureaucracy, not his own appointees, for the delays.

'Don't talk about it, be about it,' says Harvey victim waiting for aid