'Don't talk about it, be about it,' says Harvey victim waiting for aid

KTRK
By Ted Oberg
HOUSTON, Texas (KTRK) -- A blue tarp and wooden planks cover part of Kenneth Leverier's roof, keeping water from pouring into his home whenever it rains.

The inside is cluttered. It used to just be just Leverier and his wife, but after Hurricane Harvey hit in summer 2017, his uncle, who uses a wheelchair, moved in with the couple.

When the storm rolled in nearly two years ago, Leverier watched helplessly as water leaked into his home, through the ceiling and front door, drenching his hardwood floor.

The ceiling used to be white. Now it's stained yellow-ish brown and is caving inward. So are the walls.

"I thought we would get some kind of assistance or something, but it didn't happen," Leverier told 13 Investigates' Ted Oberg. "We got false promises."


A volunteer group tore up Leverier's bathroom while remodeling, but he said the group ran out of funding and never finished it. It made him leery of anyone offering help. So, when someone from the city -- with a completely different program -- reached out to him about Houston's recovery efforts, he didn't even want to consider it.

As of August 1, the city says 19,000 people have taken its Harvey Recovery Survey. Of those, the city has invited 4,900 people to apply for one of its federally-funded Homeowner Assistance Programs, but less than half have submitted an application.

Houston was granted $1.2 billion in federal Harvey housing recovery aid to reimburse storm victims. The city's already paid $6 million to a team of consultants hired to manage the storm recovery efforts and make sure flood victims get the aid they need.

"Our focus remains on the most vulnerable Houstonians - those who have the fewest resources to recover on their own," the city said in a statement to 13 Investigates. "More than 50 percent of the survey respondents are very low-income residents, thanks to a big outreach effort."

But, two weeks ago, the city said only 10 applicants have completed or have pending construction to their once-flooded homes. Another three were in loan closing and nine more were pending environmental approval by the Texas General Land Office. 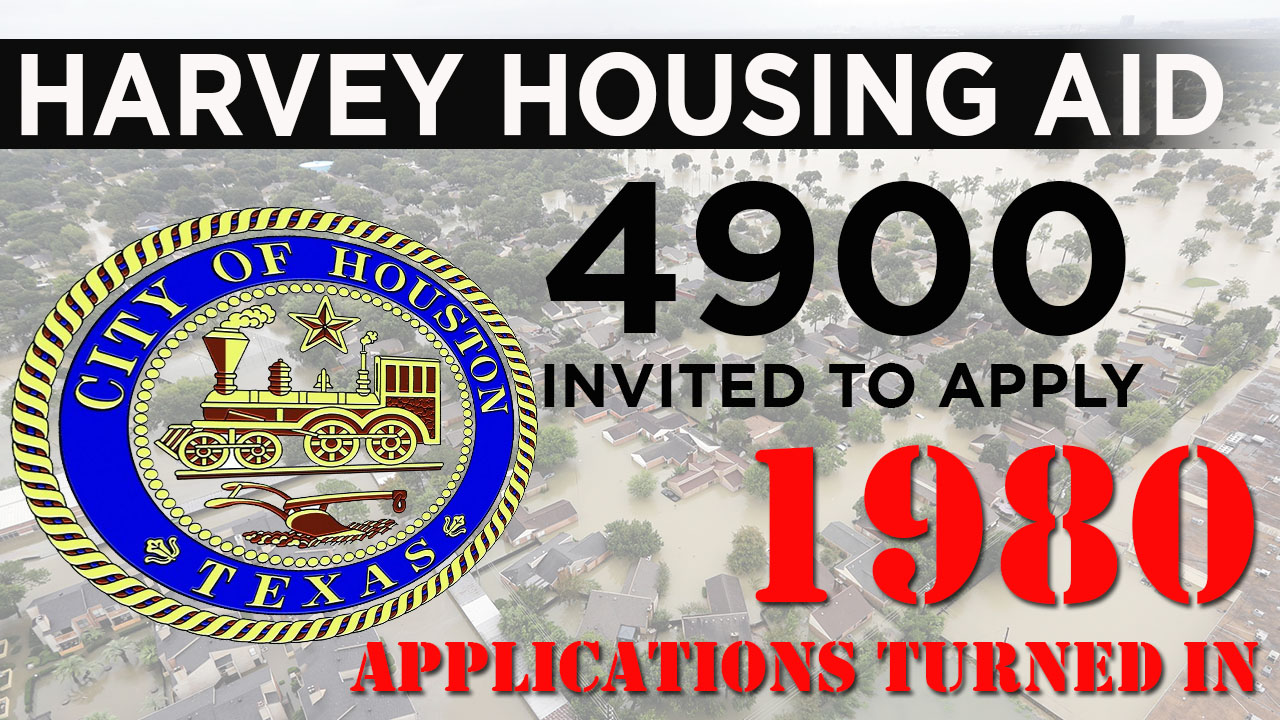 The city says 4,900 people were invited to apply to Houston's federally-funded Homeowner Assistance Program. Less than half submitted an application.

"They're hearing pie in the sky. They're hearing that it's ($1.2) billion but they can't reach it," said community activist Keith Downey. "It doesn't touch their lives."

Under the city-approved rules, if recipients sell or move out of their repaired homes early, they could be forced to pay back benefits. The city places a temporary lien on homes if you get more than $20,000 in aid. Some council members suggested it would hamper applications and for Leverier, it has.

"It shouldn't be about a deed. It should be about, 'Okay, we know this house was in this storm. We need to do something about it,'" said Leverier, who has lived in his home for 15 years. "If I could have did it out of my pocket, I wouldn't have had a problem. I wouldn't ask for help, but I can't afford it. I'm getting $600 and something a month. What can I do with that?"

"I'm like, you got the money, why not help the people," Leverier said.

Downey, president of the Kashmere Gardens Super Neighborhood No. 52, said he doesn't know a single person in the neighborhood who has received help from the city's program as the two-year anniversary of Harvey approaches.

RELATED: Only 10 Harvey victims get repairs in Houston funding program

Many Kashmere Gardens residents don't have access to the internet and rely on word-of-mouth when it comes to information about programs meant to help them, Downey said.

Helping a handful of people in the area could have a ripple effect, bringing hope to the others still waiting for aid. But, Downey said that hasn't happened.

"They may have helped some people, but I have yet to meet them (and) I've met a lot of people," he said. " ... People learn to live without, unfortunately, but we shouldn't be treating people like that."

Joel Parker said he can't walk into his home without thinking about the storm. The torn-up floor and stains on the window sill from where the water rose are constant reminders of everything that still needs to be repaired.

Parker, who also lives in northeast Houston, said he applied for the city's program earlier this year, but hasn't heard back.

"I just want somebody to step up to the plate and help us. Don't talk about it, be about it," said Parker, who has lived at his home since the 1980s. "I wish y'all (would) step up to the plate and help the poor people that need help. And not just the poor people, all the people that need help... They say so much about how much is in the budget, but that's talking, but that's not action. We need help."

The city attributes some of the delays to ensuring they give money to the right people and that applications are filled out correctly.

Downey said for Kashmere Gardens residents, their homes are all they have. They're not looking to rent or sell after repairs are made. He added that if the city's focus is preventing fraud, then it doesn't understand the needs of the people it is supposed to serve.

"I understand the safeguards. I understand the policy and the procedures and all of this," Downey said. "In the same time, these people eat three times a day. They have to have a roof over their head, day and night."

For now, though, whenever it rains, Leverier will continue relying on a roof covered with a blue tarp and wooden planks.

Have a tip for Ted Oberg? A problem to solve? Get in touch with us on our tip page, or send a tip below. (On mobile? You can open our form by tapping here.)
Related topics:
houstonted oberg investigatestexas newsdisaster reliefhurricane harvey
Copyright © 2021 KTRK-TV. All Rights Reserved.
TED OBERG INVESTIGATES