Huntsville rodeo contestant says his truck was broken into, damaged on show day 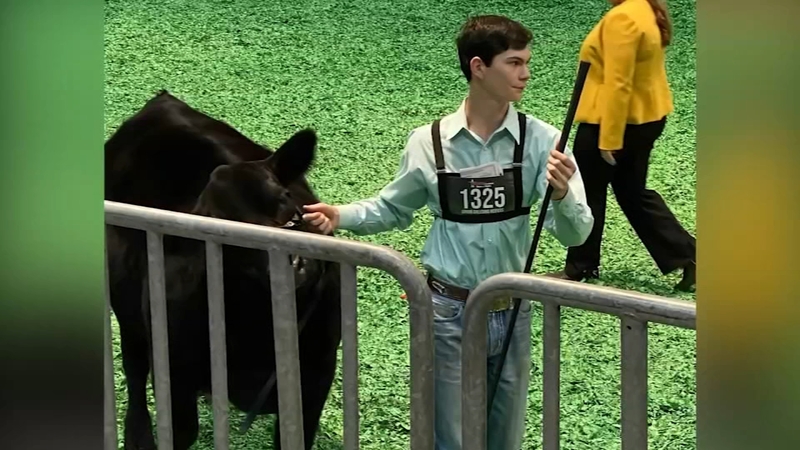 HOUSTON, Texas (KTRK) -- A teen from Huntsville came to Houston to show an animal in the Houston Livestock Show and Rodeo.

17-year-old Gage Lee woke up on show day to find his truck broken into and damaged in the Wyndham Hotel parking lot.

Gage is in the breeding division with Huntsville High School. He says he has been a contestant in the Houston Livestock Show and Rodeo since third grade.

"I used to do mutton busting and all kinds of other things," Gage said, detailing his experience in the rodeo. "Before we had this heifer that we have now, we have done the calf scramble twice, and now I have two other cows that are registered and everything that we are breeding. Last year, I had a steer, and I showed it and got money for it, so then we used the money for that to go buy the heifer I have now."

Gage has been dedicated throughout the year, but it hasn't been without its challenges. About three years ago, his single mother, Melissa Lee, was kicked in the leg by a heifer Gage was raising.

A month later, Melisa Lee said she suffered from a stroke due to a blood clot resulting from the leg injury.

"It's been a struggle since the stroke, but we just keep on keeping on," Melissa Lee said, "and we have many great friends that have helped us get to where we are today."

On Saturday at about 4:30 a.m., Gage walked to his truck and noticed it had been broken into. Gage said the keyhole on his door handle was damaged, wires under the steering wheel were cut, and the ignition starter was gone.

Gage said his truck was so damaged it is no longer drivable. His belongings, including his show jeans and his NRG stadium parking pass, were stolen.

"It was pretty mind-blowing," Gage said.

While he tried to get everything together for the show, Melissa Lee said she called Houston police to report the break-in and vehicle damage. She was on hold for hours, and an officer did not arrive at the scene. Eventually, Melissa Lee was able to get through and received a claim number.

"It was pretty intense," Melissa Lee said. "He had to be there to get the heifer ready. And here his truck is gone (damaged), and we have no way to get there."

Gage said his uncle was able to borrow a trailer on short notice and transported the truck back to Lee's home in Huntsville, waiting to go to an auto shop.

"We just wanted everyone to know what happened," Melissa Lee said. "And what does happen in situations like this and to let people know that things happen, but we were worried that there are good people in the world, and we just wanted to help everybody else not get vandalized like we did."

Gage made it to the show and placed fifth in his class.

Gage's aunt posted about what Gage and Melissa Lee experienced that morning. They received an outpour of support from the community.

"For kids these days, it's a struggle, and it's very hard," Melissa Lee said, "but we have lots of friends and family that help and supports us. That's been the best blessing we've had."


A GoFundMe account has been made to help with Gage's truck repairs.