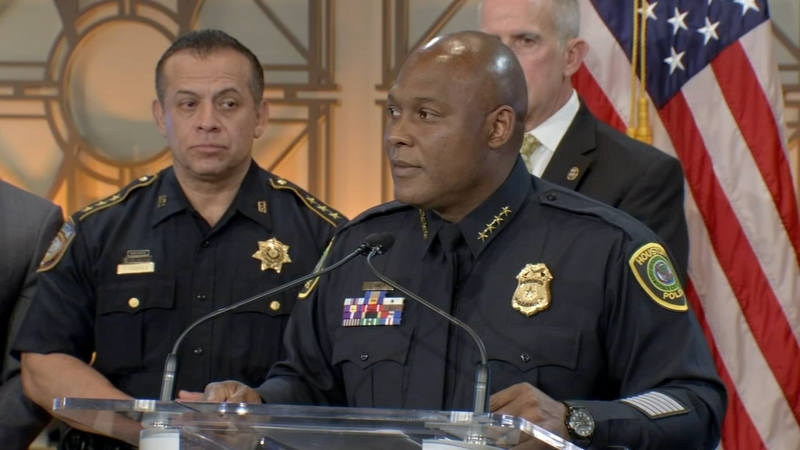 Finner said the group discussed a range of issues from how criminals get their hands on guns (often from a car break-ins, he said) to prosecution issues and the violent criminals becoming younger.
The meeting comes just three weeks after a north Houston family lost their loved one in a parking lot shooting.

Patrick Wright was killed on May 27 as he walked to open his wife's passenger door.

"That night was a night I'll never forget," said his wife Kimberly.

The two were walking out of a corner store on Cavalcade and Terry Streets, their childhood neighborhood, when a man walked up to Patrick at the passenger side door and shot him. Kimberly was just feet away from the killer.

"He looked up at me real quick, looked back down and scooted closer and finished firing into my husband's body," she said.

She and her husband were childhood sweethearts who reconnected late in life.

"He was a big-hearted person, he always wanted to help people. He used to work at the Houston Food Bank," she said. "His last words were, 'I love you.'"

Patrick is one of more than 200 homicide victims in Houston this year.

It's a staggering number that sparked Chief Finner's crime summit.

"If I sound frustrated, I'm sorry because I am," said Finner as he explained recent numbers related to suspects re-offending while on bond.

Houston police also released new numbers on Wednesday saying of the 27 homicide arrests they have made this year, 24 of the suspects were out on bond at the time and 17 of those were on bond for a
violent crime.

"If we're arresting people but they're not going to prison when they need to, that's a problem," said Finner.

He said local and federal prosecutors were present for the meeting, which was largely a renewed joint effort to target the area's most violent criminals.

"You're going to see surges in some areas and some hot spots that you've never seen before," said Finner.

They shared intelligence between local, state and federal partners with plans and solutions along with their combine efforts.

While it may be too late for the Wright family, they hope this effort will have a lasting impact and save another family before it's too late.

"People speak out if you know what happened," said Kimberly. "Something needs to stop."

With a sizable portion of Houston homicide victims this year identified as teenagers, one boxing trainer wants to be the solution to young Houstonians who would otherwise be caught.