Uber passenger hit when suspect shoots into truck on I-45 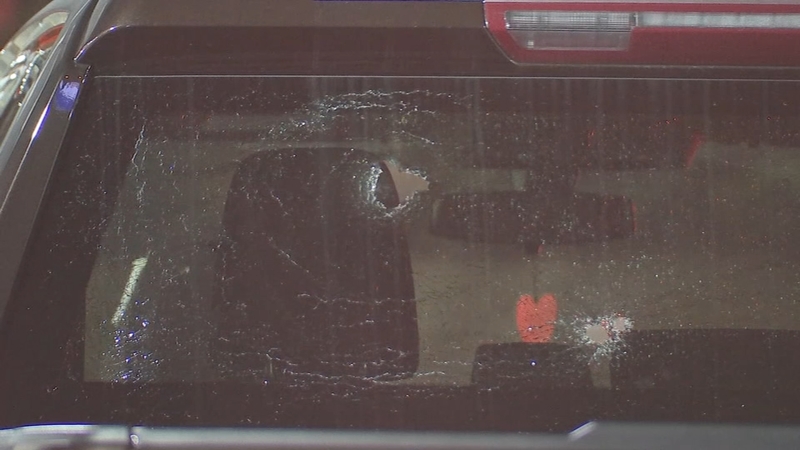 Uber passenger hit when suspect shoots into truck on I-45

HOUSTON, Texas (KTRK) -- Houston police are looking for the gunman who shot an Uber passenger along the North Freeway Tuesday night.

Video shows bullet holes in the pickup on Cavalcade Street near I-45 around 10 p.m.

According to HPD, the Uber driver picked up two men at a bar, and while they were driving southbound on I-45, someone pulled up beside them and shot into the truck.

Central officers are on a shooting at 100 Cavalcade where one adult male has been transported to an area hospital. #hounews CC13

The passenger sitting directly behind the driver was shot in the shoulder.

Police say the driver stopped at an Exxon gas station nearby for help.

The passenger who was shot is recovering in the hospital.

Right now, police are not sure on what led up to the shooting.

Investigators went back to the bar where the two passengers had been to see if they could learn any more details.

Acevedo said that, according to a preliminary crime analysis, there have been about 200 incidents in the first 10 months of this year that have ended with someone being shot on our roadways. That's compared to 150 incidents during the same period a year ago.
Report a correction or typo
Related topics:
houstonhouston police departmentshootingman shotuberdrive by shootingroad rage
Copyright © 2022 KTRK-TV. All Rights Reserved.
TOP STORIES
18-year-old arrested in shooting death of man with cane, HPD says
Texas has 10 days to fix Harvey plan that gave Houston $0, feds say
New photos released as search for escaped Texas inmate continues
Pattern change brings more rain chances to the forecast
Corvette owner opens fire on theft suspect who later dies, HPD says
Pasadena business owner cleared to open shop as he fights ordinance
Man convicted of raping 86-year-old woman in 2020 gets life in prison
Show More
1 dead in shooting outside bowling alley in SW Houston, police say
'Pharma Bro' Shkreli freed from prison for halfway house
Man shot 2 women before killing himself in Galena Park, deputies say
EquuSearch looking for missing 20-year-old last seen in SE Houston
Inbound East Fwy reopened after 14.5-hour closure spoiled by spools
More TOP STORIES News