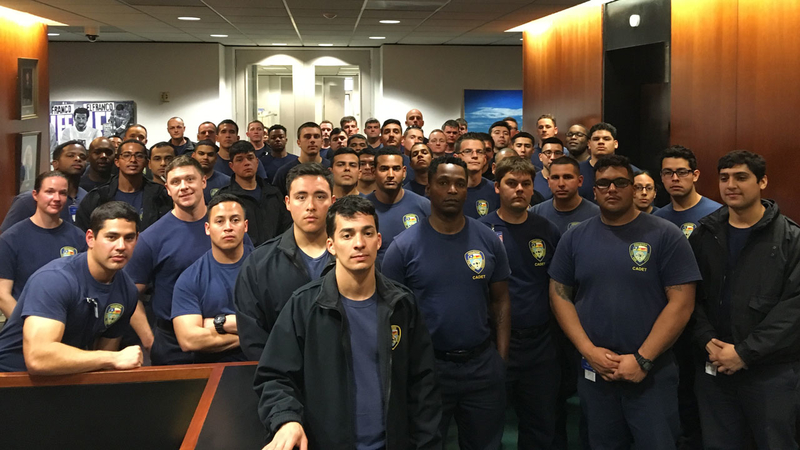 Behind one set, sources tell ABC13 Mayor Sylvester Turner laid out a plan to roll out voter-approved firefighter raises by May, while suggesting as many as 375 firefighter layoffs would be needed to pay for them.

On the opposite side of the City Hall complex, 68 Houston fire cadets filed grievances against Mayor Sylvester Turner alleging he is retaliating and discriminating against them. The 68 are all finished with their fire academy training, but have not been sworn in as Houston firefighters.

Mayor Turner insists it is for budgetary reasons and called the grievances 'theatrics.'

Turner has for weeks insisted he is working on a plan to implement Houston's Proposition B, the voter-approved pay parity initiative. It would force the city to give firefighters big raises so firefighter pay would equal similarly ranked Houston police officers.

Turner met Thursday with small groups of council members to lay out his plan. By law, Houston must balance its budget. The city is facing a substantial budget shortfall, even without the roughly $100 million cost of Prop B.

According to numerous city council sources, the mayor would fully implement Prop B by May 9 of this year. It would mean at least a 20% pay raise for Houston firefighters.

The mayor and his team are still debating the precise definition of 'parity.' Sources suggest under the mayor's plan, some firefighter ranks would forgo raises without the educational degrees similarly ranked police officers must attain. For example, some HPD ranks require college degrees. The mayor is discussing whether a firefighter without a degree would qualify for a Prop B raise.

The Houston Firefighters' union suggests they do and say that issue was decided by voters in November 2018.

In order to pay for the raises, Turner told council members the fire department may have to lay off an unspecified number of Houston municipal employees, and as many as 375 Houston firefighters - a number that would include the 68 cadets who finished training, but haven't been sworn in.

If the mayor and fire union can agree on a longer implementation of Prop B, all of the layoffs may not be required.

ABC13 has extensively covered the 68 cadets. They are made up of two training classes. We've shown you how some spend their time raking leaves and pouring concrete. All the while, the city is paying sworn firefighters overtime to fill shifts virtually every day.

All 68 cadets filed grievances Thursday with the city's Office of Inspector General at the very same time Turner was laying out his plan. Per city policy, there is no description of the alleged retaliation in the grievances. A series of check boxes allege Turner and Fire Chief Sam Pena are retaliating against the cadets. They also list age discrimination. None of the firefighters is older than 35.

As cadets, the group earns roughly $28,000 per year. If sworn in, they would jump to $40,000 or more. They would also enjoy more protection from being immediately laid off.

It all comes a day after Councilman Dwight Boykins used a procedural measure to delay 32 of the 41 items on Wednesday's city council agenda. Boykins vows to similarly delay new items next week as well if the cadets are not sworn in.

Turner's office has not responded to ABC13 questions on his Prop B and budget plan. When ABC13 receives comment, we will update this post.

Here is Turner's full statement:
"These are employment decisions based on the financial constraints of the city. My efforts to save the city from the financial ruin posed by Prop B are solely responsive to the needs and desires of the residents of Houston. Complaints by fire cadets of discrimination and retaliation will be handled by the Office of Inspector General like any other complaint.

"But these theatrics are nothing more than a distraction and do not help us to solve real financial challenges. I am confident that people can see what the Fire Fighters Association is doing: It is ironic that at the same time that we were sitting down with Council Members to discuss the implementation of Prop B, this demonstration was being held. Nevertheless, I remain focused on protecting the interest of this city, because there is simply too much at stake."