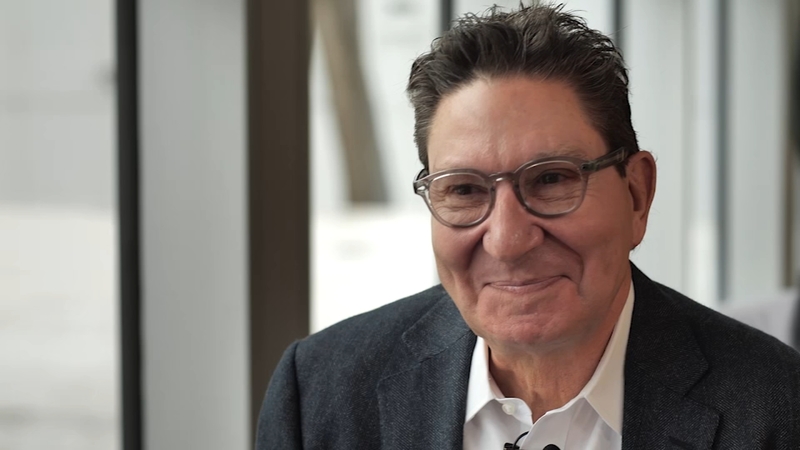 HOUSTON, Texas (KTRK) -- When it comes to what we eat and drink, Texans are pretty particular, and a Texas-based grocery store has made it their mission to find out just what we like, depending on where we live and shop.

Now the man who has overseen H-E-B stores for more than 30 years is stepping down.

Scott McClelland may be the most-recognized grocer in the state. He's best known for his comical commercials for H-E-B with local sports stars like J.J. Watt and Jose Altuve.

"It really wasn't much of a comedic stretch for me to play the dumb guy," McClelland joked. "I would put myself in situations where I would live next door to J.J. Watt or I would try to hang out with the different baseball players."

The ads helped to elevate H-E-B's brand, as executives of the grocery giant hoped. But there was another result he didn't expect.

"As a result of those commercials, so many people in Houston think they know me," he said. "So, wherever I am, they'll come up and start talking to me. And I've met so many interesting people, shapes, sizes, colors, races, backgrounds, (and) that really has probably been an even bigger payoff for me."

McClelland also learned a lot about the store's customers and how some neighborhoods wanted different things.

"Well, for starters, we know Texans are different than people who live in different states because we eat differently," he explains. "I grew up in California. I never ate a brisket until I moved to Texas. And then I found out, 'Hey, this is a religious experience, right?'"

But while most Texans could agree on the love for brisket, not everything was so universal.

"As we began to peel the layers of the onion back, what we came to realize was that people within a city eat differently based on their ethnicity, their income and their education level," McClelland added. "And so people who in West (University) actually shop differently than people who live in Katy or people who live in Gulfgate ... and we begin to tailor stores individually to the people who shop at them."

But it's not just the food or products. Even the architecture is different, so no two H-E-B stores look the same.

When he got out of school, McClelland worked for a decade at Frito Lay. After eight moves in 10 years, he took a job in Houston.

"I'd never worked in a grocery store chain, and now I was responsible for 70 of them," he said. "And about eight weeks into it, my wife said, 'Well, how do you think things are going?' I said, 'If they find out I have no idea what I'm doing, we're in serious trouble.'"

The grocery market in Houston was highly competitive with mostly national chains, but the San-Antonio-based H-E-B chose to make being local their greatest strength.

"There are a lot of people in Texas, and so you can have a big company," McClelland said. "Walmart is 17 times bigger than H-E-B. Amazon is 45 times bigger. But H-E-B is the sixth-largest grocery chain in the United States, but we only operate stores in Texas and in northern Mexico."

It wasn't always easy, as when Hurricane Harvey and the winter freeze meant their customers had greater needs.

"Well, the man who owns H-E-B, Charles Butt, he's just such a terrific person with very high expectations," said McClelland. "And he always says, 'When it comes to a natural disaster, that H-E-B should be the last to close. And the first to open.'"

So H-E-B brought in thousands of its workers from around the state to keep up with the demand. But then, the pandemic hit.

"And at every turn, we were faced with a situation we had never met before, like senior shopping hours or masks, or how many hours are you going to leave your store open?" He recalls. "At every turn, it was difficult to go through and, and to do so upfront. We said we've got to do two things. One, we have to make sure that our customers and our employees feel safe coming to the stores to shop. And secondly, we better have something on the shelf to sell them."

He believes it's because employees feel like it's their H-E-B and in a way, it is. Six years ago, owner Charles Butt gave all his workers shares that added up to 15% of the privately-owned company.

"I think he believes that a company of owners will beat out a company of employees any day of the week. And there's a tremendous spirit and culture at HEB," McClelland said on what the owner did.

He went on to add, "So we felt that if they could share in the victory and the success of the company, that would be a good thing. And I'd say probably my proudest day in the 31 years I was at H-E-B was the day that we announced ownership, on a broad scale."

During his tenure, H-E-B has more than doubled in size. The store went from 205 stores to 420 and more than 137,000 employees, with annual sales that total $32 billion. The Texas chain was recently picked as the nation's second-best grocer and the state's largest private company.

McClelland said he will spend this year as an advisor, helping to open stores in the Dallas/Fort Worth area, which is amazingly one major part of the state without any H-E-B stores.

He has nothing but the highest praise for his successor, Armando Perez, who he's worked with since 2006.

"He's probably the smartest person I've worked with at H-E-B. And he's the hardest working and most committed," McClelland said, "I like to think I work hard. I come in a far second place to Armando and so H-E-B is being left in super capable hands."

McClelland said he's loved doing this job, but it's time for things that matter more to him.

"I have four grandkids between the ages of five and eight," he said with a smile. "And so just being grandpa, I'm looking forward to driving carpool, and just being able to spend more time with them."

He said he really doesn't spend a lot of time thinking about his legacy. Instead, he says, "I know that if I've done my job, I've developed good people behind me that are going to be able to run faster and run farther than I did. And so the time comes when you hand off the ball and you give it to them and you take pride in watching them move forward."