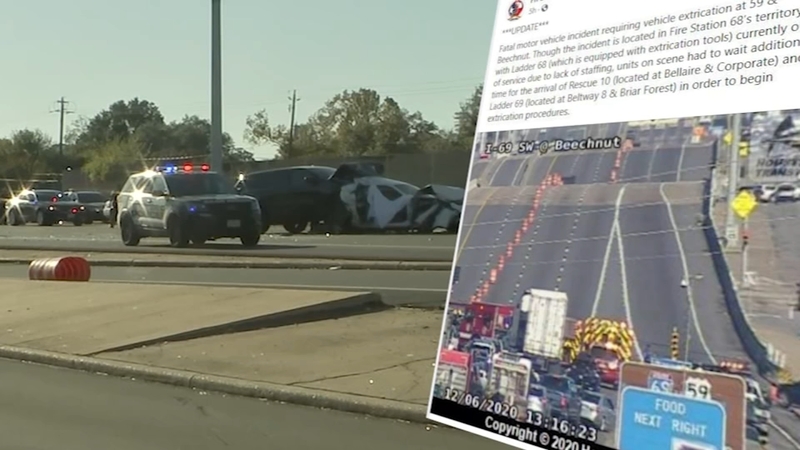 
In a Facebook post, a message reads, "Fatal motor vehicle incident requiring vehicle extrication at 59 & Beechnut. Though the incident is located in Fire Station 68's territory, with Ladder 68 (which is equipped with extrication tools) currently out of service due to lack of staffing, units on scene had to wait additional time for the arrival of Rescue 10 (located at Bellaire & Corporate) and Ladder 69 (located at Beltway 8 & Briar Forest) in order to begin extrication procedures."

"That means that the rescue equipment that should be there in five to six minutes could take 12 to 15 minutes," said Marty Lancton, president of the Houston Professional Fire Fighters Association.


Houston police say that crash on the Southwest Freeway near Beechnut killed an elderly woman around 1 p.m.

While it's not clear if the delayed response impacted the outcome of the crash, Houston Fire Chief Sam Peña says they are down by more than 200 firefighters and have been since 2019.

"When proposition B passed in order to meet that financial obligation of the $100 million additional, we had to cancel four academy classes in 2019," said Peña.

But Sunday, Ladder 68 wasn't alone. Firefighters say Ladder 51 and Ladder 76 were also out of service, all on the southwest side of town.


"This has been something that we experienced during Thanksgiving. We had nearly 16 fire stations that had units out of service and that means there is reduced fire and EMS coverage," said Lancton.

Chief Peña says effects of COVID-19 have compounded the already short staff, telling ABC13 that 140 firefighters are currently in quarantine.

"Knowing that we have that gap in personnel, we have requested and been granted additional funding to staff overtime," he said.

But Lancton says overtime is clearly not doing enough and he worries about the emotional toll it is taking on firefighters who are being asked to work two, three or even four 24-hour shifts in a row.

"For the fire chief to be so bold as to say well you know we've got overtime. The men and women are exhausted, they're tired, they're getting exposed to COVID," Lancton said.


Chief Peña says they are working hard to fill positions with plans to hire 280 firefighters this fiscal year.

He says they have two academy classes going on right now.

But turning around those firefighters takes 13 months of class and training.

At this rate, Chief Peña says it will take three years before the Houston Fire Department is back to optimal staffing levels.