Patient jumps from moving ambulance in Holtsville, is killed in hit and run 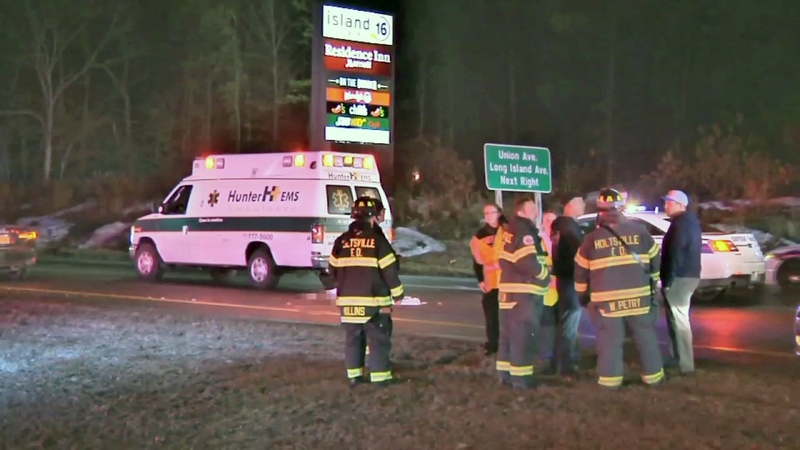 Patient jumped out of ambulance, struck in hit-and-run in Holtsville

HOLTSVILLE, NY -- A man suffering from a mental illness unbuckled himself from a stretcher, opened the back door of a moving ambulance and jumped out onto a Long Island highway before he was hit and killed by a vehicle that then fled the scene, a police official said Tuesday.

Authorities said 51-year-old Frank Ligrnetta, of Bay Shore, was being transported via private ambulance company around 7 p.m. when he "exited" the moving vehicle on Nicholls Road, just south of the Long Island Expressway, in Holtsville. He was fatally struck by a car going southbound that did not stop.

He was pronounced dead at the scene, and Suffolk County police are searching for the driver of the vehicle that hit him.

For Ligrnetta's neighbors, the first shock came on Sunday, when police had to beat down his front door. Ligrnetta was inside his apartment but hadn't been seen or heard from, his friends saying his mental health was rapidly declining.

"I was shocked, I really was shocked," neighbor Kirby Cabera said. "He was definitely not the person he was. You could see beard was growing, wasn't eating and stuff."

His sister had him transported to Stony Brook University Hospital, and Hunter EMS was moving him to a facility in North Amityville the next day when he suddenly unstrapped himself and fled out the back of the vehicle.

"Jumping out of a moving ambulance, obviously that person knew that death was likely, whether he was hit by a car or not," acting Suffolk Police Commissioner Timothy Sini said. "The witness account is quite graphic. I find it hard to believe that someone who ran over an individual under the circumstances as I know them did not realize."

Now, Ligrnetti's friends are begging the driver to come forward.

"It's always best to tell the truth," friend Nancy Elliott said. "He's a person. Regardless of anything, he's a person."

Hunter EMS has not yet responded to Eyewitness News' request for a comment on the incident.

The investigation into the circumstances of the accident is ongoing, and anyone with information regarding the car that struck Ligrnetti is asked to contact police.