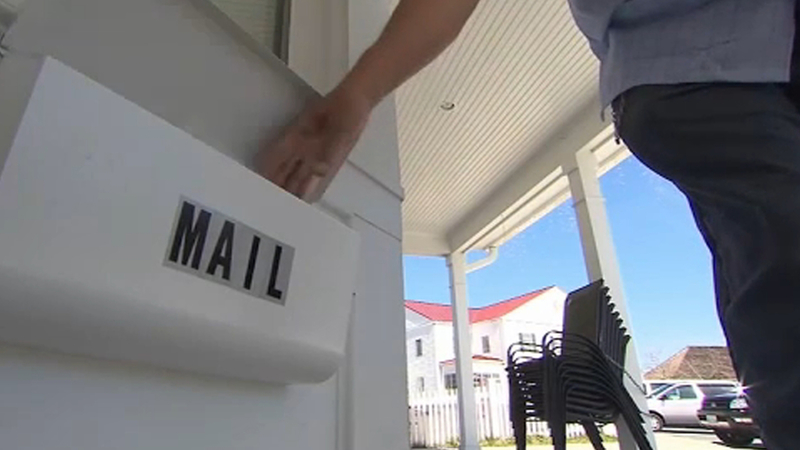 HOUSTON, Texas (KTRK) -- After waiting in line for an hour and a half during the last election, Katy resident Anne Vargas decided to vote by mail this year.

"With the pandemic this year, I don't want to - you know, older people, who wants to be in a line for an hour and a half?" she said.

After a week of waiting, Vargas said she finally received her ballot on Friday, filled it out and sent it back over the weekend. She said she'll be keeping an eye on the online system the county set up to track ballots to make sure it's counted.

Vargas, who lives in a Katy neighborhood just west of the Grand Parkway and north of the West Park Tollway, is among hundreds of voters in one of the Harris County hot spots for mail-in voting at the start of this election season.

Before lines could even start forming outside polling locations when early voting opened this morning, more than 29,987 Harris County residents voted by mail.

In Texas, residents can only vote by mail if they are 65 years or older, have a disability, are confined in jail or will be out of the country during the election period.

Statewide, 281,732 Texans submitted a mail-in ballot as of Monday, according to the latest data available from the Texas Secretary of State.

Although information on how residents voted won't be released until Election Day, 13 Investigates identified some hot spots, or areas where the most registered voters have submitted a ballot.

INTERACTIVE: How are your neighbors voting? 13 Investigates analyzed voter data for more than 29,900 Harris County residents who submit a ballot by mail as of Oct. 12. The hot spots on this map show the zip areas where more people have voted. Click each zip code to see what percentage of registered voters cast a ballot by mail. On mobile device? Click here for a full screen experience.

A Pew Research poll released last week showed 47% of older voters, who we know are at a higher risk of complications from COVID-19, are most likely to vote by mail.

But in Texas, the counties with the most mail-in ballots were Trump supporters in 2016.

The highest mail-in ballot turnout in Texas so far is in Briscoe County, in the Panhandle, where 6.15% of the 1,025 registered voters there submitted a ballot by mail. Nearly 85% of Briscoe County residents voted for Trump in 2016.

In the San Antonio region's Goliad County, 5.69% of the county's registered voters have cast a ballot so far this year. During the 2016 election, Goliad County went nearly 71% for Trump.

In Harris County, 1.21% of the county's 2.4 million registered voters have cast a ballot by mail so far this year. During the 2016 election, 54% of Harris County residents voted for Clinton.

Residents started lining up at early voting locations before they even opened this morning.

Betty and Mark Battistone joined a line of socially distanced, face mask-wearing residents at 8:30 a.m. as they waited three hours to cast their ballots.

"We wanted to get it done," Betty said. "God forbid something happens in your world, you can't make it, you want to know this, of all things, is done."

Mark said he did request a ballot by mail, but decided to come in person instead.

"To be honest with you, I just don't trust it," he said. " I don't think the post office -- I can't get a guaranteed delivery from Amazon in two days, it takes me a week, so I don't think they can handle 30 million ballots, so I came in, voted in person."

The latest totals from the Texas Secretary of State's office shows 16.9 million Texans registered to vote. Nearly 15% of the state's registered voters are in Harris County.

In 2016, about 78% of the residents 18 years and older registered to vote, according to the Secretary of State. Only 59% of registered voters actually cast a ballot.

Vargas said she's one of the oldest residents on her street, so she's not sure what may have caused her neighborhood to have a higher turnout so far in main-in ballots. Still, she said, she's glad she cast her ballot and encourages others to participate in this year's election, too.