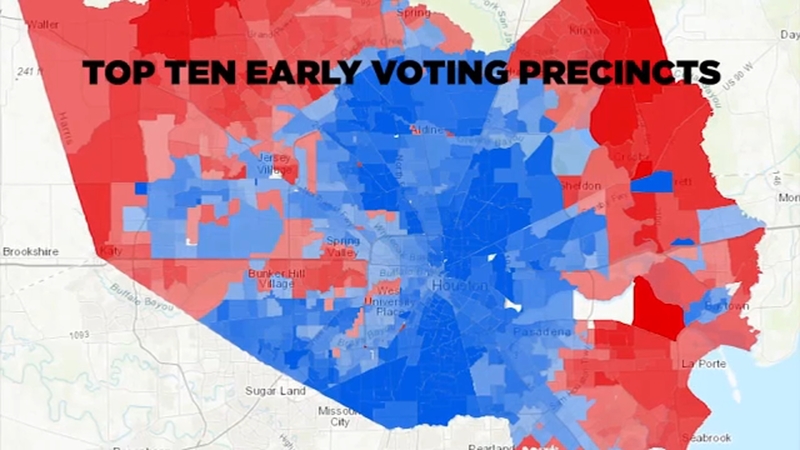 HOUSTON, Texas (KTRK) -- When the first day of early voting ended Tuesday, more than 1 million Texans cast a ballot by mail or in person.

In Harris County, nearly 9% of registered voters cast a ballot in person during the first two days of early voting, as of Wednesday afternoon, shattering records from previous presidential elections.

The historic day broke the previous record for the most votes cast during a single day in Harris County's early voting period and nearly doubled the number of people who voted during the first two days in Harris County during the 2016 election.

13 Investigates looked at where residents are voting most and found 80 precincts where more than 10% of registered voters cast a ballot by the first day of early voting.

Precinct 228, which is just south of Riverside Terrace and west of MacGregor Park, topped the list of people who voted either by mail or in person as of Monday with 14.12% of registered voters who cast a ballot.

Max Aronds, whose precinct has seen more than 9% of residents vote so far, went to the polls on Wednesday to cast his ballot.

INTERACTIVE: How are your neighbors voting? 13 Investigates analyzed voter data for nearly 170,000 Harris County residents who voted by mail or in person, as of Oct. 13. This map shows how many people voted in each precinct. The darker colors show where more registered voters cast a ballot voted. Click each precinct for a more detailed breakdown. Click the box next to "2016 Presidential Election" to see election results for each precinct. On mobile device? Click here for a full screen experience.

There are about 930 voting precincts in Harris County. 13 Investigates looked at the precincts with the highest turnout of registered voters who cast a ballot Tuesday to see who those areas voted for during the 2016 election.

Only 24% of the 100 precincts with the highest turnout so far this year gave President Donald Trump more than 50% of their votes during the 2016 Election.

This year, nearly 9% of Harris County residents who registered to vote went during the first two days of early voting. Even more cast a ballot by mail.

Nearly 15% of the state's registered voters are in Harris County.

Residents have until Oct. 30 to vote early. The last day to request a mail-in ballot is Oct. 23 and Election Day is Nov. 3.