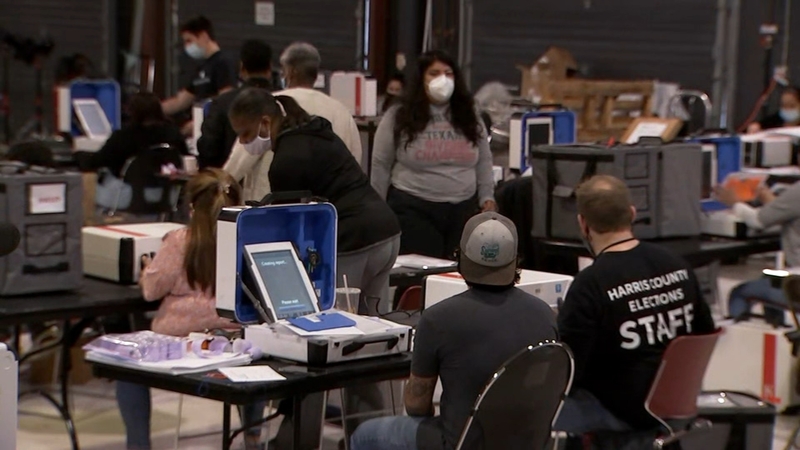 HARRIS COUNTY, Texas (KTRK) -- Many primary races have declared their winners but the counting continues in Harris County after a judge extended the deadline to file election results with the state.

Early on Wednesday, officials believed they would meet the Wednesday, 7 p.m. deadline. Harris County director of voting Beth Stevens said almost 500 of 750 polling locations in the county had been tabulated as of 10 a.m.

But in an update Wednesday evening, Stevens said they were 99.9% tabulated.

According to Stevens, at about 6 p.m. Wednesday, the elections administrator's office learned the Harris County GOP filed an impoundment petition seeking to extend the deadline and to demand the county turn over any election materials if they miss the new deadline.

She ruled that the county could have until 11 a.m. Thursday to complete their count.

Stevens said Harris County had under 1,500 votes left to count when they learned about the GOP petition Wednesday evening. Though the counting stopped momentarily, it later began again after the ruling from Phillips extended the deadline.

The county has to appear before a court at 11:30 p.m. Wednesday to update on the count status.

An additional status hearing will take place Thursday at 9:30 a.m.

Election officials counted votes all night, and they're not going anywhere until the ballots are counted. The last truck carrying ballots was unloaded Wednesday morning.

"We are having the first election in Harris County, the first major election and the first primary, with paper ballots," Stevens said. "We know from across the country that this is the best practice, to have paper ballots, voted by the voters, as backup material."

Stevens emphasized that the paper ballots slow down the process for everyone -- voters and election workers alike.

WATCH: Harris County workers were confident Wednesday morning that the deadline to get the votes counted would be met.

She said hundreds of thousands of ballots have already been accurately and securely processed, and Democratic and Republican workers are on track to process the rest before the deadline at 7 p.m. Wednesday.

"Some of the incidents that occur with paper are then looked at by our central counting station, which is, again, manned by both political parties," Stevens said. "That is part of the process here, but is not the majority by any means."

By 2026, every county in the state will have to use paper ballots just like Harris County. Stevens said other counties in Texas that are already using paper ballots were also taking longer to process.

Voters in Harris County had their choices marked on two separate sheets of paper, and those two sheets then had to be inserted into the scanner one at a time. Harris County Elections Administrator Isabel Longoria said some voters put both in at the same time, and county officials said it will take days to count all of those ballots.
"We're counting these ballots. We're getting them in. It's gonna take a couple of days, right, to finish the entire process, as we've always seen," Longoria said earlier, before the 10 a.m. update Wednesday. "I don't have risk concerns about counting the election ballots for this election."