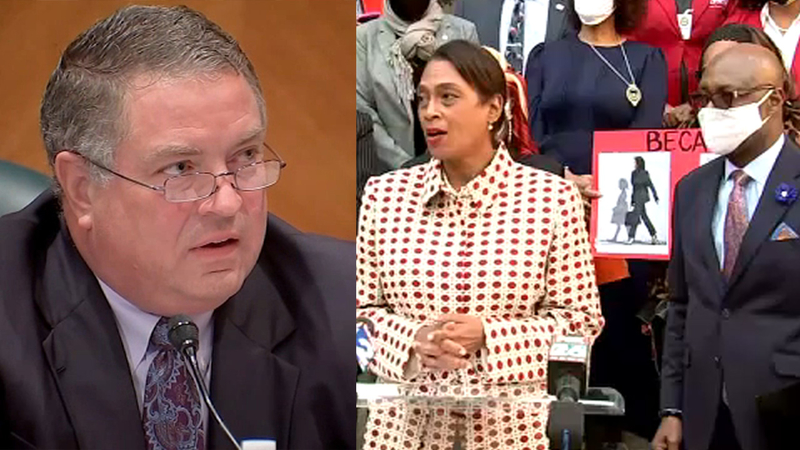 HOUSTON, Texas (KTRK) -- The Houston branch of the NAACP is the latest group to condemn a Houston city councilman over a controversial Facebook post involving former first lady Michelle Obama.

Greg Travis, who represents Houston's District G, which encompasses areas including Memorial City and the city's west side, shared a post last month with an unflattering picture of the former first lady next to first lady Melania Trump, commenting "Yep, just saying."

In response to comments on his post, Travis mentioned affirmative action in regards to Obama, saying, "She was born with her qualifications."

Lori Robinson, who interacted with Travis on Facebook about his comments, is one of several Houstonians who are calling on him to resign. They met at a rally in front of city hall on Tuesday.

"I am a proud person who has been able to have doors open for me, work hard to get my education, work hard in work, because of affirmative action," she said. "We come from different paths but one thing ... we are hardworking people. Not because we were born qualified, as the councilmember stated, but because I, and my cohorts, have worked very hard to become qualified to walk into a door of opportunity that was opened because of affirmative action."

Eyewitness News spoke with Travis about his comments after he published the photo and said he has a right to his opinion.

He said, "You can disagree with me, and if you want to have a conversation on affirmative action, we should have that there's pros and cons to it. I think it just shows a contrast and that's what the meme has done, it's meant to exaggerate it. Those who love Michelle Obama aren't going to like it, those who love Melania Trump probably are."

Meanwhile, other city council members have chimed in about Travis' post. Council member Letitia Plummer said, "It is unacceptable, [I'm] clearly appalled. As leaders, we do have a responsibility to make sure what we do say is respectful."

"I think he owes an apology to the young women who work in his office and to every woman and Black person that worked in the office of District G," said council member Tiffany Thomas. "He collects a supplemental check from the city, 12% of his district are Black. Those tax dollars he receives, Black Houstonians contribute to that, and so I think he has to acknowledge the fact that he has to have some self-accountability to that."

Council member Abbie Kamin took to Facebook to respond to his post, saying, "This is unacceptable," and "As a white (and Jewish) colleague, I believe it is important for all of us to speak up against such sexist, racist, offensive comments."

Travis said he believes people are blowing his post out of proportion, adding he won't be resigning.

"I'm not going to apologize for having an opinion or having free speech or free thought," said Travis.

"He knew what he was doing," said Woods. "This is who we have representing us."

At the request of Mayor Sylvester Turner, Travis has since deleted the post.