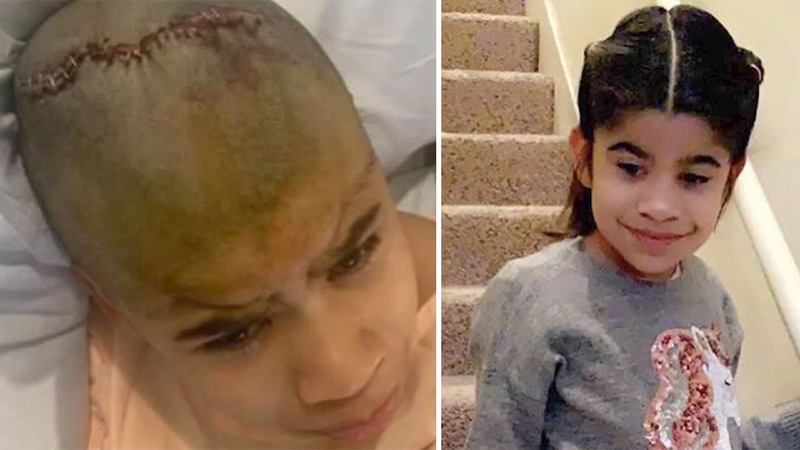 HARRIS COUNTY, Texas (KTRK) -- A 9-year-old girl with special needs was the victim of a road rage shooting last month near Katy.

"It's just so heartbreaking," said Arianna Quinton. "As a mom, we don't like seeing our kids in pain, especially when she can't even describe to me her pain."

Joellie Mejia was shot in the head on Feb. 5 as she and her family were on their way home. According to the Harris County Sheriff's Office, it stemmed from a road rage incident that started on the Katy Freeway feeder road near Westgreen.

A witness said the shooter fired multiple shots into the family's vehicle. The girl is currently fighting for her life.

Quinton said her boyfriend, who was driving, honked at another car as he tried to change lanes. The encounter escalated and the family was shot at two different times.

At least six bullets were fired, Quinton said. One of them ended up hitting her daughter.

"One millimeter below, it would have done more damage. She probably wouldn't have made it [out] alive," said Quinton.

Joellie has Pitt-Hopkins syndrome, a rare genetic disorder that delays development. She is non-verbal.

The little girl has a 6-inch scar on the top of her head, which had to be shaved the night of the shooting. Quinton said she covered up mirrors at home to protect Joellie on her return.

"I didn't want her to see herself because she loved to have me do her hair every day before school," Quinton said.

The heartbroken mother said two men were involved. Only one of the men, who was identified as 22-year-old Kenneth Gray, who's a father himself, has been arrested and charged with aggravated assault with a deadly weapon and felony injury to a child.

"I don't understand how you would do that, having a child of your own, just for something so small like that," said Quinton. "It's a real sickness."

According to a sheriff's office spokesman, investigators are still working the leads in the case.

Meanwhile, a Pitt-Hopkins advocate has set up a GoFundMe for the family to help with Joellie's medical expenses.

In the end, her mother simply wants justice.

"It was a horrible, traumatizing experience," she said.