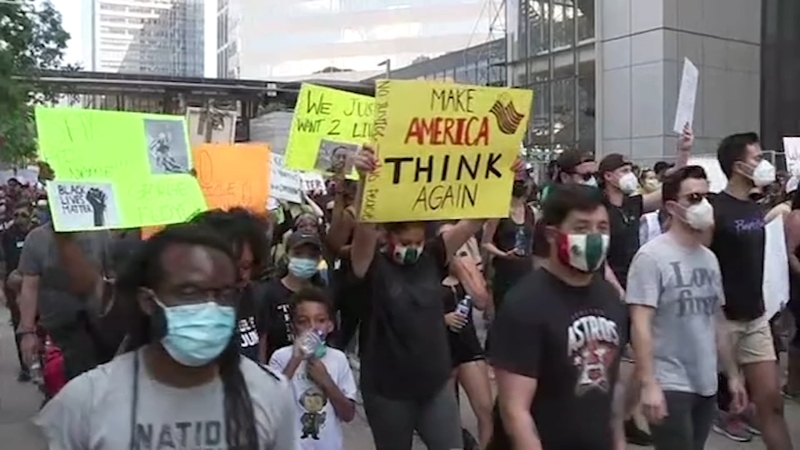 HOUSTON, Texas (KTRK) -- The family of George Floyd, the man whose death in Minneapolis police custody triggered nationwide protests, joined a crowd that city officials estimated at 60,000 demonstrators to march in Houston Tuesday.

Floyd, who died after a Minneapolis police officer pressed his knee into Floyd's neck for several minutes, grew up in Houston.

A crowd grew exponentially at Discovery Green ahead of the rally organized by Houston entertainers Trae Tha Truth and Bun B.

Demonstrators marched to City Hall, for a rally that lasted a little more than an hour as various Houston officials, activists and members of Floyd's family spoke.

Mayor Sylvester Turner told the crowd that the rally and march were about "lifting up the family of George Floyd."

"Today we want to love on them. We want them to know that George did not die in vain," he said.

Another powerful moment came after the march when Houston Police Chief Art Acevedo joined demonstrators with a prayer. He pleaded for a peaceful march, and encouraged people to continue to take care of Houston.


Before the start of the march, Bun B told the crowd the march and rally would be peaceful and he asked the crowd to look out for anybody who could cause trouble. Lakewood Church Pastor Joel Osteen joined Floyd's family and Bun B and started the march with a prayer.

Bun B then led the crowd of at least several thousand on a chant as he said "What's his name?" and the crowd replied, "George Floyd."

"That's right and don't you ever forget it," Bun B said.

The crowd later got down on one knee and was silent for 30 seconds.

As the crowd marched about a mile from Discovery Green park in downtown Houston to City Hall, they chanted, "Hands up, don't shoot" and "no justice, no peace."

Some of the officials at the head of the march included Mayor Sylvester Turner and Sheila Jackson Lee and Sylvia Garcia, who represent the Houston area in Congress.

All along, officials and organizers have urged those marching to have their voices heard, while demonstrating peacefully. Any violence has been discouraged.

After the march, many protestors gathered in the street while some were seen on top of a METRO bus that transported police officers to the march. Flash bang devices were deployed in an effort to disperse the crowd, followed by dozens of people seen running through the streets.

At some locations in downtown, demonstrators could be seen throwing water bottles and other items at police officers.

Protesters jump on top of a Metro bus in downtown Houston.

Several demonstrators were spotted lying on the ground, showcasing how George Floyd was on the ground in handcuffs before his death.
EMBED More News Videos

Demonstators lying down like George Floyd who was killed.