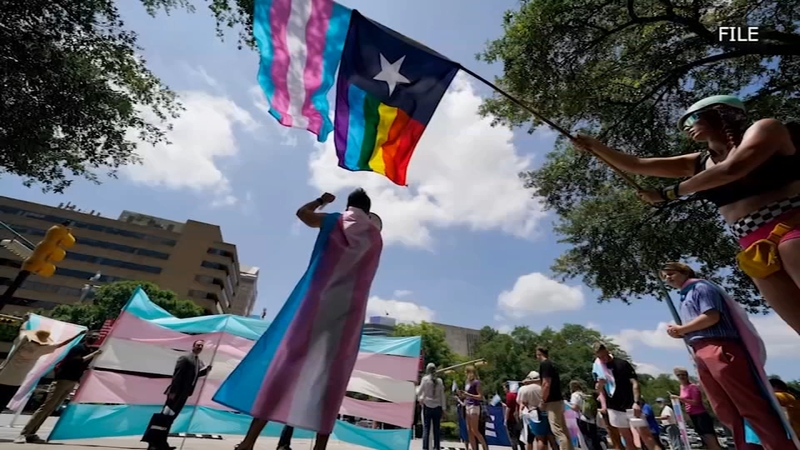 HOUSTON, Texas (KTRK) -- Attorneys with ACLU Texas say they've been receiving an uptick in calls from concerned parents of transgender youth regarding their legal rights during the last two days. This comes after Gov. Greg Abbott sent a letter Tuesday to the Texas Department of Family and Protective Services, directing the agency to investigate reports of gender-affirming care as child abuse.

The letter states in part, "The Office of the Attorney General (OAG) has now confirmed in the enclosed opinion that a number of so-called 'sex change' procedures constitute child abuse under existing Texas law. Because the Texas Department of Family and Protective Services (DFPS) is responsible for protecting children from abuse, I hereby direct your agency to conduct a prompt and thorough investigation of any reported instances of these abusive procedures in the State of Texas."

A Houston mother, who requested anonymity and will be referred to as Jane Doe in this article, said that her family joined their 8-year-old transgender daughter this past year in advocating for trans rights at the Texas State Capitol.

"My daughter didn't know the world was scared of her until this year, because we've sort of kept her in this very safe bubble of family and friends who are supportive," said Doe. "She asked, 'Why do so many people hate me?' That's the first time she's ever expressed any kind of discomfort with who she is."

Doe said she was one of the parents who reached out to legal experts for reassurance after seeing Abbott's directive. She chose not to tell her daughter about it, fearing it could add to her child's anxiety.

"I was disgusted and distraught, because when you first read those opinion statements, it seems like he's telling CPS centers to start knocking on doors. There's a sense of panic," said Doe. "I think the worst thing that my daughter can feel is as if somebody could come and take her away from her family, her favorite people."

Doe went on to say, "Supporting and loving your child is the antithesis of child abuse. My other fear is that this is going to fire up the crazies and they're going to try to find out where she goes to school, where we live, threaten us, and try to hurt her."

No court anywhere in the country has ever found that gender-affirming care can be considered child abuse. https://t.co/D8F7rfELdV

The staff attorney at their Texas chapter, Brian Klosterboer, said both are non-binding and that no court in Texas has ever found that gender-affirming health care could constitute child abuse. He said the only state to have done so is Arkansas, but the law was blocked after a lawsuit brought forth by the ACLU.

"We understand that people are really scared and this was frightening. The opinion that Ken Paxton wrote is quite confusing and poorly written," said Klosterboer. "The problem is the opinion of the attorney general really conflates surgeries with puberty blocker and hormones. No doctor in the state has ever performed medical care that's not necessary. That's already the legal standard that exists."

"I think the worst thing that my daughter can feel is as if somebody could come and take her away from her family, her favorite people," a Houston mother of a transgender child told ABC13.

Doe worries for other transgender youth, who may not have a loving and supportive environment at home like her daughter.

"Children who don't have supportive caregivers are eight times more likely to attempt suicide than those who do, which is kind of the basis for why we were so supportive right from the beginning. To me, that statistic is all that really mattered," she said.

She declined to comment on her daughter's medical information. But she said that children under the age of 11 typically don't receive any gender-affirming care, other than therapy.

Back in May, Texas Values told our content partner, The Texas Tribune, that it believes children and teens are too young to be able to make decisions regarding gender-affirming procedures. Jonathan Covey, director of policy for the Austin-based religious advocacy group said, "When you allow children to make decisions regarding life-altering treatments and procedures, when we won't even allow children to buy cigarettes or alcohol or drive, there's an issue that needs to be addressed."

Klosterboer and Doe disagree. They believe this is a political move by Abbott a week before the primaries.

"This type of care is nothing new. It's been going on for decades. Every single major medical association in the country and Texas have found that this type of medical care, which typically involves puberty blockers and hormone therapy, is safe and medically necessary," he said.

"There are about 10 problems that every Texan faces and my guess is if you were to poll them, trans children would not be on that list. They should be working on our grid. We all know that was a complete failure," she said.

Requests for comment from Abbott's office have not been returned.

A number of parents of trans youth tell me they’re concerned following Gov. Abbott’s new directive to Texas DFPS on Tuesday about gender-affirming date. Coming up tonight on @abc13houston at 6 p.m., hear from an attorney with @ACLUTx about the legalities surrounding the order. pic.twitter.com/DkJLi2XBa0