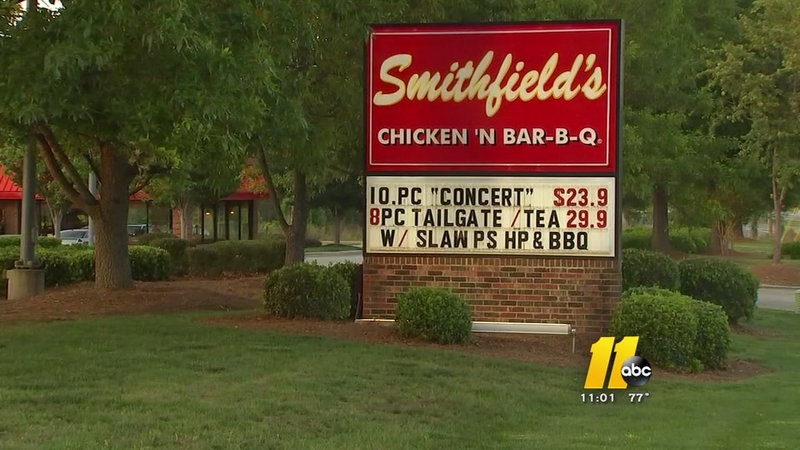 GARNER, North Carolina -- Law enforcement officials are disappointed and disturbed by what happened to police officers at a Garner restaurant.

On Jones Sausage Road, the message by the drive-thru at Smithfield's Chicken 'N Bar-B-Q says that it's "grateful to serve."

Friday night, that service came with a side of disrespect.

"Thank you Smithfield's Chicken & Barbeque Jones Sausage location for the class and professionalism as you sang "F the Police" as my brothers at Raleigh Police Department attempted to eat at your restaurant. The manager sang along as well. Do you really feel that was appropriate?"

The post claims employees of the restaurant were singing NWA's song "F--- the Police" as they ate.

The post has gone viral and has been shared more than 2,000 times.

"Police officers go out there every day and they risk their lives and to be treated with such disrespect is truly unfortunate," Rick Armstrong with RPPA said.

The union found out about the incident after a fellow police officer posted about it.

Officers are calling for the employees to be disciplined.

"Suspension and/or including termination," Armstrong said.

Within hours of the union's post, the franchise owner responded by saying:

"We will do a thorough investigation and terminate anyone employed that doesn't share our respect of all law enforcement."

"We do appreciate his quick response and we're going to have to wait and see what he does, and hopefully he follows up with appropriate action on these employees," Armstrong said.

ABC13 sister station ABC11 in Raleigh has reached out to the franchise owner for an update on his internal investigation, but he has not yet commented.