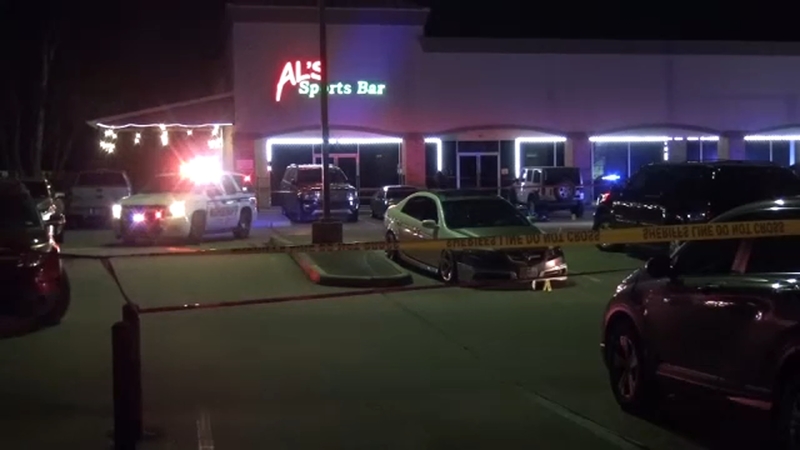 HOUSTON, Texas (KTRK) -- Four people were shot, and one person was killed after a shootout at a sports bar in W. Harris County, according to Harris County Sheriff's Office deputies.

Deputies responded to a shooting at Al's Sports Bar on 16203 Westheimer Road just before 1 a.m. Saturday. When they arrived at the scene, four people had gunshot wounds, and one man was pronounced dead at the scene.

The shooting is believed to have happened after a fight with several men inside the bar spilled out into the parking lot. Once outside, three people pulled guns, and multiple shots were exchanged, according to officials.

Investigators said the man killed had fired a weapon, but they are unsure whether he struck anyone.

Two people were taken to Memorial Hermann by helicopter. Two others were taken to area hospitals by ambulance. Two of the four are believed to be bystanders, according to deputies.

Sgt. Dennis Wolfford with the Harris County Sheriff's Office says they are still working to figure out exactly why the fight started but did see video of an 'unprovoked assault' before the shooting started.

"We do know we've observed what appeared to be an unprovoked assault on video. So I don't know what the history is between all these people at this time," said Wolfford.

Al Roemershauser has owned Al's Sports Bar for 15 years. He says this is not the type of place where this kind of violence has ever happened before.

"We don't have this problem. I was shocked to get a phone call at 12:30 that something had happened like that, you know. A fight? It's a bar, sometimes that happens. But nothing like this," said Roemershauser.

He said he is devastated because it did not have to happen.

"These things happen a lot and this far out it's a lot rarer than it is in town, but things still happen, you know and don't be an idiot if someone wants to fight you, laugh at them, and walk away. Look what happened. Somebody died because they were a tough guy," said Roemershauser.

Roemershauser said they do plan to make a change to their dress code after this. Starting Saturday, no club-affiliated clothing will be allowed. He said it is a rule they have had in the past.

District 4 deputies responded to 16203 Westheimer Rd in reference to a shooting. Upon arrival units located 4 people with gunshot wounds. One adult male is confirmed deceased on scene, one male and one female were transported via Life-flight and one male by ambulance. #hounews pic.twitter.com/FMPBYeYbzN

Roemershauser said one of the men involved in the shooting was wearing a motorcycle club vest. While he does not know if that had anything to do with the shooting, he wants to do what he can because he does not want any more trouble.