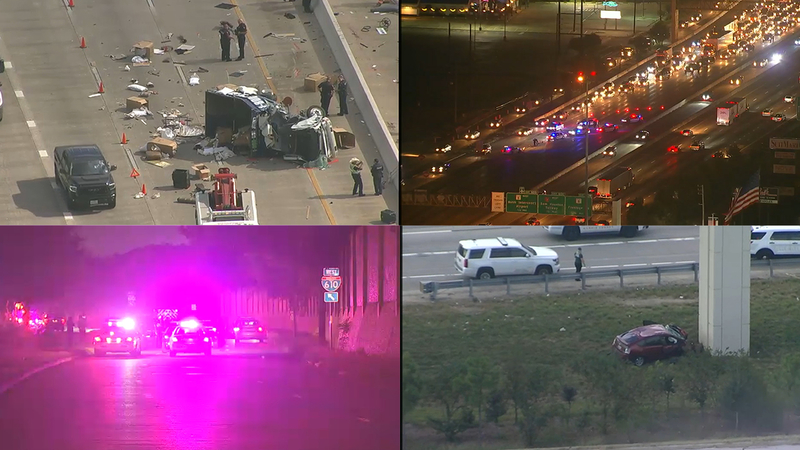 HOUSTON, Texas (KTRK) -- It's been a deadly 24 hours across the Houston area as a series of unrelated crashes have been fatal for those involved.

One person was killed in a crash with a semi truck Wednesday morning in Atascocita. It happened in the 5700 block of FM 1960 East some time before 10:30 a.m. Two dogs were also in the car with the victim, according to witnesses. One of the dogs died at the scene.
EMBED More News Videos

ABC13's TJ Parker learned this new information at the scene in the video above.

A man on a motorcycle died Wednesday night after crashing on the westbound South Loop 610 feeder road near Stella Link, according to Houston police. It happened around 8:30 p.m. in the 3100 block of the South Loop near Stella Link. The rider lost control after passing a car, HPD said. The victim was wearing a helmet when it happened, according to officers on the scene.

In southwest Houston, a man in a Toyota SUV died Wednesday night when he lost control and struck a light pole and then a tree. It happened around 9:40 p.m. in the 7400 block of Harwin Drive near Bonhomme Road. A man in his 20s died at the scene, according to HPD.

A person died Thursday morning when they tried to cross the southbound lanes of I-45 on foot, Houston police said. It happened around 5:20 a.m. near West Road. There was no word on the victim's identity or where they were headed when it happened.
EMBED More News Videos

The delays stacked up fast after the crash and impacted traffic coming in from Spring, The Woodlands and other points north.

One person was killed Thursday in a two vehicle crash on North Sam Houston Parkway near Hollister in northwest Harris County, according to Pct. 4 Constable Mark Herman.

One person died Thursday afternoon when their car crashed head-on into a bridge support in north Harris County. It happened around 1 p.m. at the I-45 North Freeway interchange with Grand Parkway

An average of 10 people die every day in crashes in the state of Texas, according to TxDOT. Last year, 668 people died in pedestrian-related crashes, a five percent increase from 2018, according to data from the TxDOT.