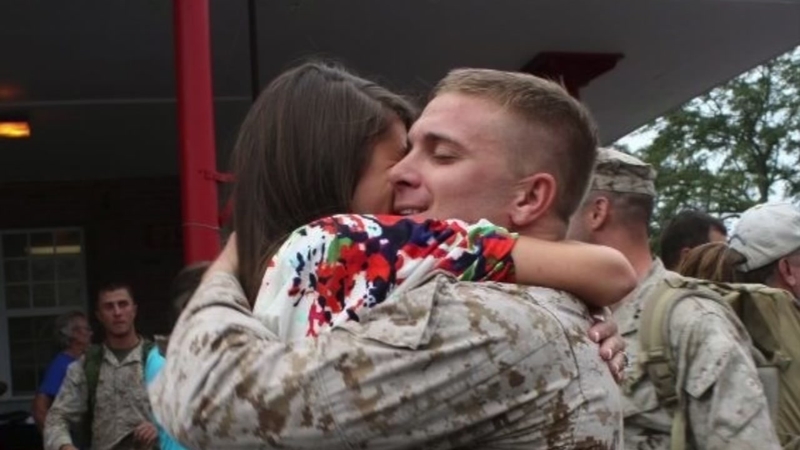 HOUSTON (KTRK) -- At any given time, there can be dozens of bills in Congress dealing with military veterans. Many of those have to do with benefits they and their families receive. As of this weekend, there are more than 900 pending bills related to veterans' benefits.

At a time when more and more veterans are coming home from war, those benefits are all the more critical, and they are the central plank of a growing fight for what vets families say they've earned.

Raechel Richards is among those fighting. Her husband, Rob, served three tours in Afghanistan as a Marine sniper.

"My husband had come from a long, long line of veterans," she told Eyewitness News.

In the midst of his second tour, he was badly injured.

"He was injured on a foot patrol and he sustained injuries to the neck, groin, legs, back, arms," she explained. "It wasn't until later that we discovered that he did actually have a traumatic brain injury."

Richards was medically discharged. Richards says he suffered from depression and was overcoming a drug addiction when his VA doctors prescribed a variety of painkillers that built up in his system.

According to a report in the Marine Corps Times, Richards' death was ruled accidental, a result of oxymorphone toxicity -- his medication had poisoned him.

"I got home and I found him in our home," she said. Now a widow and 28 years old, she is about to attend law school at LSU. She is also joining the movement for stronger benefits and faster, more comprehensive treatment of veterans and their families.

"Widows like me need to be able to say this is what happened and I want to change it so it doesn't happen again," explained Richards.

There are currently a variety of bills on Capitol Hill which would enhance those benefits. Congressman Gene Green is among the sponsors.

"I think we can do better for our veterans and their families, and legislation is part of it," said Rep. Green.

One of the bills would impact widows like Richards. If she remarries before age 57, she loses the benefits he earned in battle.

Like servicemen and women who protect their country, police officers are charged with keeping their communities safe. They too are provided benefits, both financial and medical, that live after they die. But, unlike the military, HPD officers' spouses don't have an early marriage penalty. The city changed a similar restriction years ago.

"That's completely unfair," said the Houston Police Officer Union's Ray Hunt of the military system. "What happens if they remarry and that guy dies or she ends up divorcing? We still have the children to take care of."

Right now, one of the bills on Capitol Hill would eliminate the remarriage restriction for veterans' spouses. At the same time there is that push, there is also a spotlight on improved treatment.

"We ought to make sure that a veteran has benefits and training and care," said Rep. Green. "But we also need to recognize the family is part of that commitment too."

The Veterans Administration has undergone a massive restructuring in light of the VA hospital scandal that erupted in 2014. In Houston, the largest VA hospital campus in the nation, they are working to provide improved and timely treatment for those who've served. They've added 280 additional full-time employees in the last two years.

"My VA access has really been about veterans deciding when, where and how they're going to receive the care that they want and obviously deserve," explained Associate Director of the Texas Medical Center VA Christopher Sandles. "If you haven't taken the opportunity to walk the halls of this organization, you should."

Whether in the halls of a hospital or the halls of Congress, there is a growing movement to better provide for the men and women who've fought on behalf of our nation and the families who've sacrificed alongside them.

"If this culture of veterans' healthcare continues, there are going to be a lot more people like me," said Richards.

There are currently 54 veterans benefits bills in Congress that are up for floor consideration in the House or Senate.