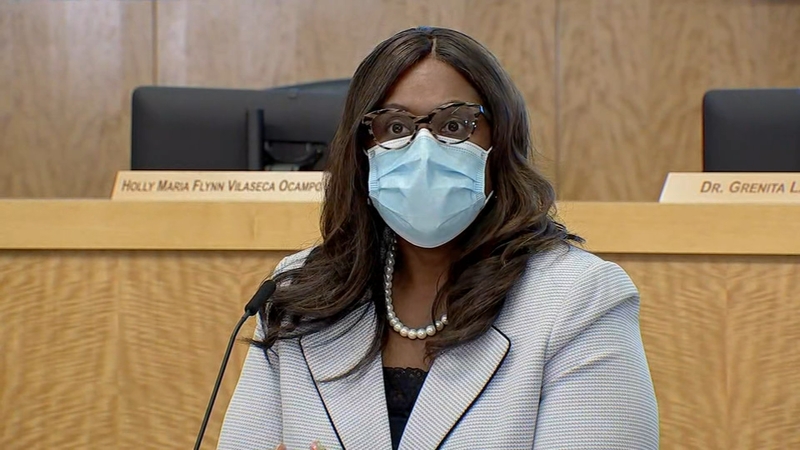 HOUSTON, Texas (KTRK) -- Houston Independent School District Interim Superintendent Grenita Lathan announced Monday morning that she would be leaving the district to pursue a new journey across the country.

In a statement on Twitter, Lathan announced that she accepted "an opportunity to make a positive impact in the Springfield (Missouri) Public School District."

"The students, teachers, principals, staff, parents, and community of HISD are close to my heart, and I leave knowing they are resilient and stronger together," the statement reads. "Their light will keep shining through, and they will continue to be known for their innovation and success."

When asked about her departure on Monday afternoon, Lathan said, "There comes a time when you have to look for other opportunities."

She mentioned she had been contacted about applying by recruiters, not just for Springfield, but for other districts as well.

Ted Oberg looks at what the shakeup will mean for teachers and students.

"I didn't expect that at all, and HISD rarely surprises me, but they did [on Monday,]" said Heather Golden, a mother of two HISD students. Lathan was her family's 4th superintendent. Her oldest child is in 9th grade.

"Ultimately, it leads to instability, and that makes it harder on campuses to remain stable and they are the bedrock of the district," said Golden.

According to AASA, the School Superintendents Association, the average tenure of a superintendent is between five and six years. During the last six years, HISD has gone through three.

When you add in major setbacks like weather events and a pandemic, it's harder for positive change to be realized, according to University of Houston professor of educational leadership Dr. April Peters-Hawkins.

"What we know about change is that it takes five to seven years, and we know the average tenure is somewhere between five and six years, in general, so we're moving folks out before change takes place," she said.

Lathan will remain interim superintendent at HISD for the remainder of the 2020- 2021 school year. Her new position in Missouri starts on July 1, 2021.

"This district really just came. It just rose to the top of being completely aligned with what I'm looking for as it relates to being able to lead a district to the next level," she said.

Now, the search is on for a new superintendent. LaTrice Ferguson, a mother of three HISD students, said she's concerned the list of qualified candidates will be short.

Lathan's departure is just one of the many shake-ups at HISD, a district that has been plagued with issues in recent years. ABC13's Jessica Willey has more on what seems to be a bigger problem for the state's largest school district.

"When we reflect back on the school year, the number of students unaccounted for, grades and then how far behind we may be in some of our districts, I'm fearful this won't seem like a job someone will want to attack but I'm hoping I'm wrong," she said.

Lathan has been with HISD since 2015 and served as the chief academic officer since 2016.

Two years later, in 2018, she was appointed as the district's interim superintendent after former Superintendent Richard Carranza announced he would be leaving for New York.

Just hours after announcing she will departure the district, HISD Interim Superintendent Dr. Grenita Lathan answered why she was leaving and her new role. Watch her interview in th

"As president of the HISD Board of Education, I would like to thank Dr. Lathan for her many years of service to the students of the Houston Independent School District - especially for her leadership as interim superintendent since March 2018. From moving numerous HISD campuses out of improvement required status to her strong leadership during several major weather events and a global pandemic, she has truly been a beacon for our students, staff, and families. We wish her well."

The school board voted six to three in November 2020 not to name Lathan permanent superintendent. At the time, trustees said the search to find someone to permanently fill the position could last six to nine months.

"I respect the decision that the board made to conduct a nationwide search. But I also respect who I am as a leader, and I know what my skills are. And so it was nothing personal. It was just this is the right time to move ahead," Lathan said on Monday.

Lathan will also be making history in Springfield as she announced she will be the first female superintendent of that school district.

The Houston Federation of Teachers also released the following statement on Lathan's departure:

"The Houston Federation of Teachers would like to thank Dr. Lathan for her service to Houston and HISD. Dr. Lathan led the district through many challenges and crises during her time with the district. In the last few years, we were glad to see increased investment in community schools and expanding pre-K, which translated into stronger public schools. While we did not always agree, Dr. Lathan worked to increase collaboration with teachers and school support personnel during her tenure. Despite Texas Education Agency's interference, we found a willing partner in Dr. Lathan when raising health and safety concerns during the COVID-19 pandemic.

"We believe HISD Board of Trustees should conduct a full, in-depth superintendent search that authentically listens to the voices of teachers, support personnel, parents, students and the HISD community. We join with Houstonians in demanding that Gov. Abbott keep his hands off our neighborhood schools and let us decide who should be the next Superintendent. We need a district leader who values educators and meeting the needs of the whole student and who listens to educators, students and parents about what our public schools need."

Springfield PS is significantly smaller than HISD, with a population of 23,650 students compared to HISD's 196,943 students.

When it comes to budget: Springfield PS has a $473 million budget, while HISD has a budget of $2.028 billion.

Here's a further breakdown of the demographic differences between the districts:

Here's a look at HISD's superintendents over the past 20 years.

A day after Dr. Grenita Lathan was passed over for the permanent superintendent job, two HISD trustees explained what will come next as a nationwide headhunt starts.