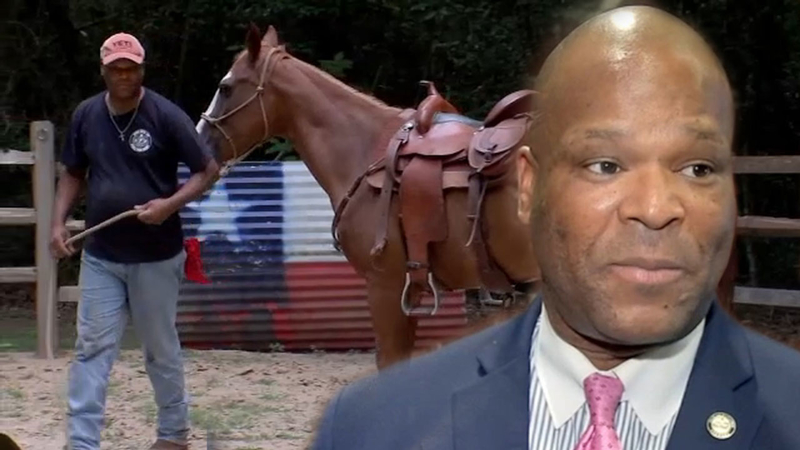 HOUSTON, Texas (KTRK) -- We've seen Houston City Council member Dwight Boykins helping seniors in District D by cutting their grass, even picking up trash on the side of the road.

I bet you've never seen him with dirty jeans, boots and a shot gun, tending to his 12-acre ranch.

"My brother would call this 'Serenity.' My brother Rodney named it when we built this place," Boykins said.

The Boykins' ranch sits one hour outside Houston, nestled deep in the backwoods of Conroe. And when he's here, he's Cowboy Boykins.

"I'll wear Wranglers every weekend. I love country music. I love trail rides," Boykins said, as he saddles his horse.

But he doesn't take his horse to the old town road, he likes to cruise in his baby, a '53 Chevrolet. But his main baby? Mrs. Genora, his wife of 30 years.

"Can I talk about the peach in my cobbler here? Yeah. She's the turkey necks in my collards," Boykins said.

"You know, the funny thing is I actually saw him at a nightclub from a distance, and I said, 'Oh, that's a nice looking gentleman over there.' I was with some girlfriends," she said.

They're longtime members of Windsor Village Church. Genora says serving people is a family affair, and at the center of the family is their faith.

"But the thing to me about faith is you have to live it," Genora added.

Boykins tells me he's relied on his faith, even in the early days of his career.


Boykins graduated from Texas Southern University with a business degree, then went on to start his own federal lobbying practice, eventually taking a dip in the political pool after being inspired by a mentor.

"A guy named Ovide Duncantell, I recall when he was a campaigning, I was pushing cards, didn't know what I was doing, just passing out flyers for him, and he said he was running for city council, District D, and he, I just heard him saying he wanted to help some people," Boykins said.

Boykins went on to win that seat and has held it since 2013. Now this cowboy councilman wants to continue to help people as Houston's next mayor.

"Yeah, man, I love serving people. I tell people all the time, 'I'm not a politician. I'm a servant of the people,'" Boykins said.

Report a correction or typo
Related topics:
politicshoustonelection 2019houston politics
Copyright © 2022 KTRK-TV. All Rights Reserved.
TOP STORIES
Daylight shows home destroyed after standoff with shooting suspect
What we know about man accused of shooting 3 HPD officers
Suspect arrested after 30-minute chase ends on I-45 in Texas City
Clouds clearing today, sunny through the weekend with rain next week
5 people charged in connection with Pct. 5 corporal's murder
How many times can I reuse my N95 mask?
Decades after TV anchor disappears, convicted rapist denies connection
Show More
Driver dies after slamming into 18-wheeler's trailer on US-59
Woman shot in the shoulder during robbery set up in SW Houston
Prepare for a major closure at I-69 and 610 West Loop this weekend
Officers escort body of corporal killed in ambush to funeral home
ABC13 obtains HPD scanner traffic of chase that led to shootout
More TOP STORIES News