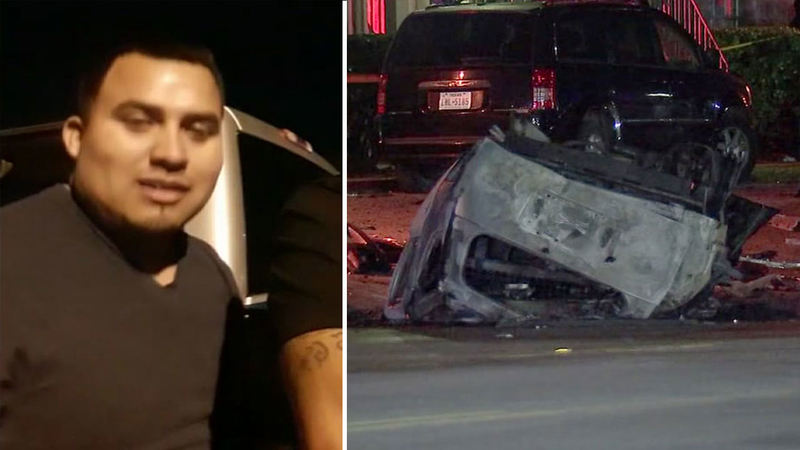 HOUSTON, Texas (KTRK) -- On Christmas Eve, a horrendous DUI crash demolished an HPD patrol vehicle in a fiery crash and sent the two officers trapped inside to the hospital with serious burns.

Officer Alonzo Reid was released yesterday, but is in pain from burns to his back and legs. Officer John Daily is in stable condition, but with burns over more than half his body.

On Wednesday, the district attorney's office continued to build the case against Cesar Collazo, who had recently moved to Houston. He was in the U.S. on a work visa that expired at the end of the year.

Part of the evidence, prosecutors said, is a Facebook Live video that shows Collazo and some friends next to a truck with beer cans stacked on the hood. According to the timestamp, it was taken within hours preceding the crash.

Investigators are also focusing on where the alcohol was bought. Collazo allegedly had several receipts for beer purchases from multiple retailers, including two from a neighborhood store near the crash site.

Collazo attempted to run from the scene, but was found hiding in the apartment complex where he was staying.

The district attorney's office is now tracing the trail of alcohol from the driver to the places he obtained it, even if he was not consuming alcohol on their property.

"I don't think retailers realize the liability they have," said Teare. "Like any manager of a bar, or bartender, in a place that sells alcohol on their property, you have that same responsibility, even if you sell it closed (bottle), because you have no idea that person isn't getting in their car and starting to drink again."

It's also a warning to anyone who goes out to drink on New Year's Eve.

"You better have a plan to let someone else do the driving," said Teare. "Because we have our own plan if we catch you."