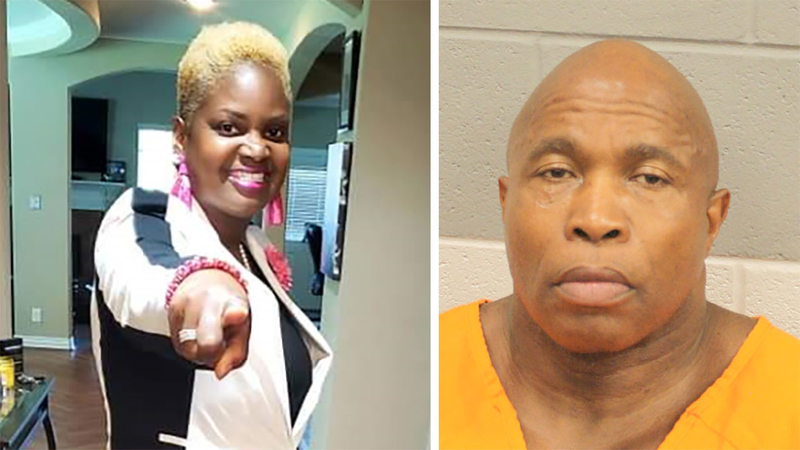 HOUSTON, Texas (KTRK) -- The veteran deputy of the Harris County Sheriff's Office accused of killing his wife during a fight over sex bonded out of jail on Wednesday.

Renard, 63, is charged with murder. His wife, Patricia Spivey, 52, was shot to death at their home on Briscoe Street over the weekend.

Court records show Spivey called 911 at about 3 a.m. Sunday to request an ambulance, saying he and his wife had fought over a gun, and he accidentally shot her.

Renard was taken to Ben Taub Hospital for a gunshot wound to the leg. He told officers Patricia had shot him in the leg as they were "tussling with the gun" and they "had been arguing all day." Detectives, though, said it was inconsistent with an accident.

His defense attorney Mike DeGuerin maintained Wednesday that the shooting happened during a struggle over a gun and that Renard even performed first aid on his wife while he was on the phone with 911.

"We're all trying to determine how the gun went off. The gun is likely to go off accidentally in a dispute like that," DeGuerin said. "I don't know the facts. I've read reports: one shot went in her arm and one went into her chest. Those are the facts, but I don't know how the shots were fired."

When asked whether he has spoken to Renard, DeGuerin said, "He's very sullen. He came to my office with his daughter."

Renard did not appear in court Wednesday morning as he continues to recover from his gunshot wound in the medical unit at the Harris County Jail. Renard's brothers and his nephews stood alongside DeGuerin.

"Mr. Spivey is a very good man with over 30 years experience in law enforcement. No criminal record," DeGuerin said.

Houston police officers found Patricia dead in the master bedroom closet. They added that near Patricia were her cell phone, three shell casings and a 9mm handgun that was placed on top of a clothes hamper.

Patricia's brother told police that the couple had been arguing about their lack of intimacy, and Patricia's suspicions that Renard was "possibly back on steroids and/or having an affair," according to court documents. He added that he spoke with Renard three times in the hours before the shooting. Renard reportedly told him things like, "she's counting my pills (low testosterone medication), claiming that I'm sleeping with someone else."

"I never thought that he'd go that far," Patricia's brother, Ezra Washington, told ABC13. "I should have acted on it and that's going to eat me up for a long time, forever. But him saying that and then acting on it, I gave him the benefit of the doubt."

Officers at the scene noted that Renard outweighed Patricia by about 100 pounds, and appeared to be an avid body builder, with weightlifting trophies spotted in his home.

"She was my cushion when things were hard," Marshall told ABC13. "(She was) my friend when I needed to vent, my hands when I needed help, but most of all, that woman is my mother."

Renard was hired by the Harris County Sheriff's Office as a detention officer in 1996 and became a deputy in 1998. Throughout his career, Renard has been primarily assigned to the detention command, serving in court operations since 2016.

Renard has also worked as an actor, most recently as the bailiff on the TV show "Justice for All with Judge Cristina Perez" from 2012 to 2016.

Court records show Renard was ordered to pay more than $10,000 to his ex-wife and daughter. His ex-wife sued him for neglecting their daughter, who is now an adult.

Renard's employment with the sheriff's office is under review.

"The Harris County Sheriff's Office family extends our sincere condolences to the family of Patricia Spivey as they mourn the loss of their loved one," said Sheriff Ed Gonzalez. "While the facts of this specific case will be determined by a jury, I encourage all victims of domestic violence to seek assistance from law enforcement and others whom they trust. I also ask anyone who suspects a friend or loved one may be the victim of abuse to persist in helping them escape a potentially deadly situation."

Court documents say that Renard may have a mental illness or an intellectual disability. A mental health assessment has been ordered.

DeGuerin says they plan to return to court on Friday to discuss specific bond conditions.