Davis Mills saw his first NFL action in Week 2 after Taylor was injured. Mills' first career start was in primetime in Week 3.
KTRK 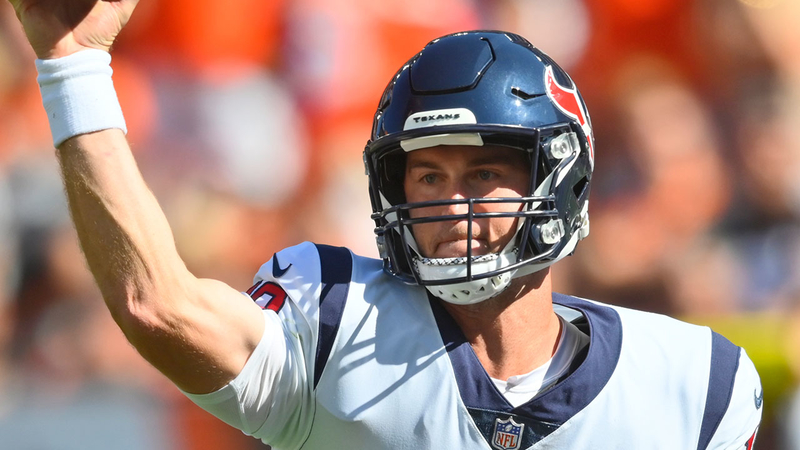 In the wake of a shutout loss against the Indianapolis Colts, Houston Texans head coach David Culley announced rookie quarterback Davis Mills will be starting under center for the rest of a season that already has the team no longer contending for a playoff spot.

Mills, who started six games earlier in the season in place of Taylor as he healed from a hamstring injury, will resume QB1 duties on Sunday when the Texans host the Seattle Seahawks.

The 23-year-old, who was drafted out of Stanford in this past April's draft, was inserted in the third quarter of the Colts loss after Culley benched the veteran Taylor.

"I felt like [Mills] gives us the best chance to win," Culley said on Friday.

It wasn't long ago that Culley was saying that about Taylor, who signed a one-year deal with Houston in March and was the Texans' clear starting quarterback going into the season. Taylor played well in the first 1 1/2 games of the season before injuring his left hamstring against the Cleveland Browns. Mills replaced Taylor, going 0-6 in his six starts.

Taylor has struggled since his return from injured reserve, throwing five interceptions and taking 12 sacks in four games. When asked why he decided to name Mills the starter for the rest of the year, Culley said, "You've seen the last three ballgames we've played."

"It has nothing to do with Tyrod not being ready to play or anything," Culley said. "It's just we feel like that's the best thing that gives us the chance to win."

Before Taylor was replaced by Mills against the Colts, he completed five of 13 passes for 45 yards. This season, Taylor has completed 60.7% of his passes for 966 yards, with five touchdowns and five interceptions.

"He didn't like the decision," Culley said of telling Taylor that Mills would be the starter. "I wouldn't have liked it either, but this is a production business. At offense, it always starts at the position. We needed a spark. We needed a change. We made the change."