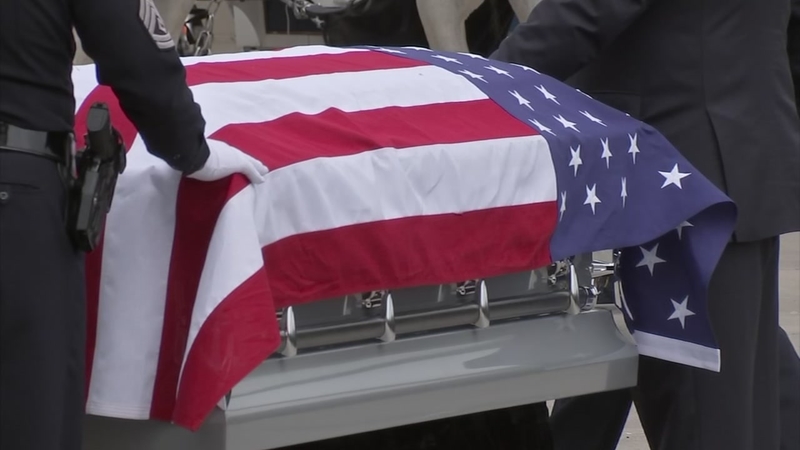 HOUSTON (KTRK) -- When Deputy Darren Goforth is laid to rest Friday, the Houston Police Department and the Harris County Sheriff's Office Honor Guards will join forces for what may be the biggest police funeral ever in the Houston area.

The HPD Honor Guard is the largest in Texas, and possibly in the entire nation.

Captain Gregory Fremin was drawn to the HPD Honor Guard 30 years ago.

"It is a challenge to keep your emotions in check but we all know when we arrive on a scene we have a job to do," Fremin said.

Sgt. James Armstrong is also one of 37 members of the prestigious group.

"To let the families know we are there for them and to honor this person's service to the city. He may have put his entire adult life into it and so that's our primary role to honor his service and show respect," Armstrong said.

When Eyewitness News visited them, they were remembering Houston police officer Richard Martin, killed during a police chase.

"We all kind of have a saying amongst ourselves that we've literally had a front row seat to some of the greatest unfathomable tragedies and loss of life to our brother and sister officers," Fremin said. "It's an honor to wear this uniform and an honor to lay them to rest when that time does happen."

There's a horse drawn hearse, the sound of bagpipes, and a somber crowd to remember Martin. But long before the flag is draped over the coffin and the family arrives, hours of practice go into making every detail precise. The Guard ceremony is based on military concepts so precision is everything.

"You have thousands of people waiting on this one command or two commands or this movement or that movement," said Armstrong.

HPD's Guard has trained at Arlington National Cemetery with the U.S. Army's Old Guard. They've also been called upon for everything from active and retired officers' funerals to presenting colors at city functions and charity events. They are sometimes asked to be pallbearers for a retired officer if there aren't many family members left.

"It reinstills to them that the police department or Houston Police Department never forgot about their years of service that their loved one gave this city," Fremin said.

The handling of the hat and the folding of the flag are sometimes the only memories family members have of that emotionally blurred day.

"That's something special, nerve-wracking, but when you keep in perspective what this means to the family it's what I hold dearest as far as my contribution," Armstrong said.