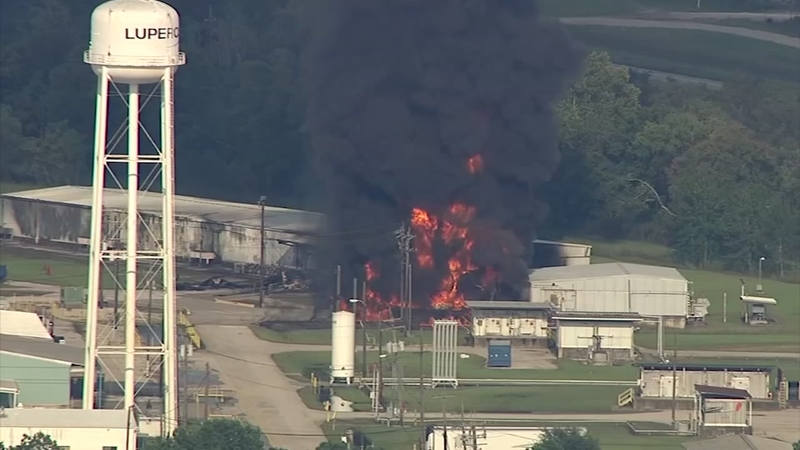 Officials say Arkema was 'reckless' in preparing for Harvey

HOUSTON, Texas (KTRK) -- After watching 10 minutes of the Weather Channel on the day Hurricane Harvey made landfall as a category four storm, Arkema CEO Richard Rowe decided the company needed a crisis call to get company updates, according to an email filed in Harris County Wednesday.

The filing, made by the Harris County District Attorney's office in Arkema's criminal case, comes a week after a filing from prosecutors that showed an Arkema competitor made plans days before the storm to ship dangerous chemicals to New York. The documents, filed as a part of the public record, is a rare glimpse inside a prosecutor's case. Rarer still are two such filings in as many weeks.

"This case is based on politics not facts or law," said Arkema attorney Rusty Hardin. "The prosecutor should have gathered all the facts before filing these ridiculous and baseless indictments. It appears this court filing was aimed simply at getting media to repeat the allegations."

Arkema's chemicals stayed on site as floodwaters crept up over the Crosby chemical plant, eventually leading to several fires and explosions. Documents from the company's ride-out crew that stayed on site as the floodwaters rose show incredible efforts to move hundreds of pounds of chemical product by hand to areas of the plant that were refrigerated after the power went out.

Arkema said its plans provided for multiple layers of redundancy if there was a loss of power. Arkema's backups included onsite generators, a nitrogen system to keep product cool and a last-resort plan to use refrigerated trucks to keep product in.

When the water overtopped all the backups, the fires began.

Many of Arkema's products require constant refrigeration or the product will degrade and combust.

Prosecutors filed the documents to ask a judge to force Arkema to turn over two sets of documents related to the planning process before the storm. Rowe's email asking for planning to begin included an attachment that included notes about the "crisis" call and the plans of the company.

Arkema didn't turn the document over, claiming it was privileged. Prosecutors say it's a summary of how the company prepared, not genuine attorney/client communication.

The DA also wants a look at what the company did after insurance company FM Global warned the company needed to address flood risk on the site that sits in a floodplain. It recommended the company create a Flood Emergency Response Plan, prosecutors said.

Arkema North America faces a criminal charge as a company for recklessly releasing chemicals into the air. Its CEO and plant manager face similar charges.

Arkema's attorneys contend this prosecution is unwarranted and claim Arkema's plans couldn't have anticipated for Harvey-level flooding. Despite having water on the site before, it had never reached the six or seven feet seen during Harvey. Plant officials believed the multiple layers of backups would be enough to handle the storm.

Have a tip for Ted Oberg? A problem to solve? Get in touch with us on our tip page, or send a tip below. (On mobile? You can open our form by tapping here.)
Report a correction or typo
Related topics:
ted oberg investigateschemical plantchemical leak
Copyright © 2022 KTRK-TV. All Rights Reserved.
TED OBERG INVESTIGATES
Texas has 10 days to fix Harvey plan that gave Houston $0, feds say
Lina Hidalgo suggests DA could have her 'indicted' as political ploy
Few get direct help after complaining to Texas' consumer watchdog
Indicted Harris County staffers, DA at odds over bond conditions
TOP STORIES
Estranged husband shot wife, 4-year-old daughter, mother-in-law
Mayor, HPD chief to update search for 14-year-old's killer
Rainfall projections continue to increase for next week
Fertitta Family College of Medicine named after $50M donation to UH
Here are the top 14 things to do in Houston this weekend
New 53-mile stretch of Grand Parkway opens in both directions
Teens accused of stealing car Katy mom used to comfort son with autism
Show More
House passes terrorism bill after shooting in Buffalo, New York
What is monkeypox? What to know after US confirms 1st 2022 case
Ford recalls SUVs due to engine fire risk
Family learned of loved one's death watching Buffalo shooter's video
HPD officers fatally shoot man after chase and crash in NE Houston
More TOP STORIES News