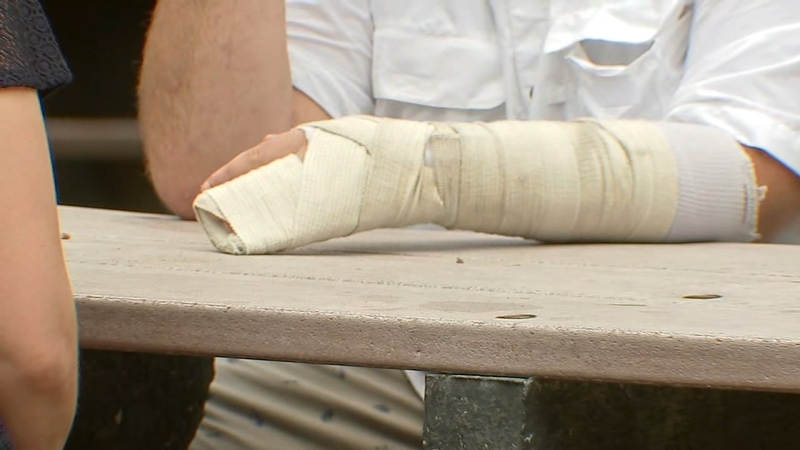 CYPRESS, Texas (KTRK) -- The victim in a Cypress torture case described the nine-hour horror as a near-death experience.

Speaking exclusively with ABC13 Eyewitness News, he showed us the machete cut to his upper right thigh and the broken fingers that will require surgery.

"I've got three broken fingers. I need pins in two of these and then my middle finger, it needs screws," said the victim who shared his story on the condition of anonymity.

He says his fingers were broken while he was protecting his head during a beating with a 2-by-4.

"He swung like there was nothing to lose," said the victim.

Investigators say the nightmare took place inside the home of Cypress contractor John Indridson. He and another suspect, Felix Zamarron, were found after hiding for more than two weeks.

A third suspect, Lamar Sanders, was arrested at the scene of the crime on the same day.

RELATED: 2 men allegedly hog-tied and forced to snort coke during kidnapping in Cypress

The victim tells us the torture included being hog-tied, doused with gasoline, then burned with a torch. He says the suspects also used belts and a staple gun to hurt him and his buddy.

"They tried to staple my eyes shut to together," the victim said.

He also reported to investigators that he was sexually assaulted. "It was bad. It was hard, hard to talk about."

While investigators have not released a motive, this victim says it was his buddy, the other victim who was requested by Indridson to come to his home to help him move.

It was 1 a.m. on April 15. This victim said red flags went up, so he joined his friend to make sure everything was okay.

The moment he walked into the garage, he said knew something was wrong.

"It used to be a mess," he told ABC13. "When I walked in, I noticed the difference right away, it was all cleared out, all of it."

He believes the attack was pre-planned by Indridson. He says the garage was set up for their arrival, "He, he wanted me to die."

The suspects are charged with aggravated kidnapping and aggravated assault.

The Harris County Precinct 4 Constable's Office said they are still waiting on lab results for a potential charge of sexual assault.

The victims want to see all three suspects prosecuted to the fullest extent.