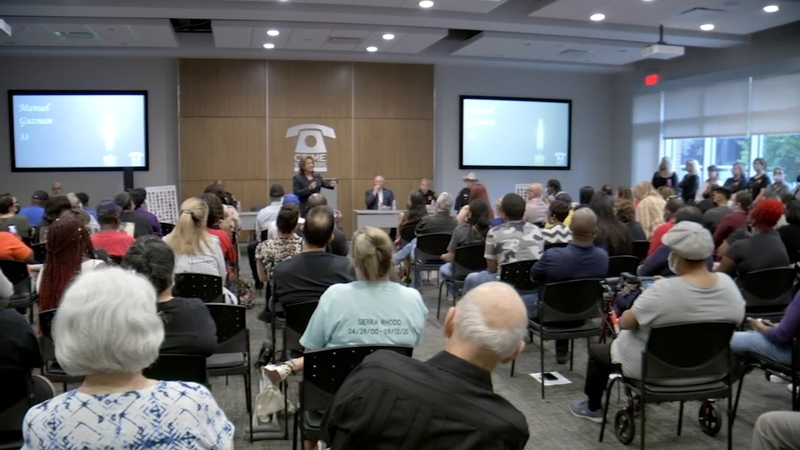 Victims' families cling onto hope this National Day of Remembrance

HOUSTON, Texas (KTRK) -- On National Day of Remembrance of Murder Victims, dozens of families and survivors gathered at the Crime Stoppers of Houston building in Midtown to honor their loved ones and to support each other.

Victim Advocate for Houston Crime Stoppers Andy Kahan said 100 American Flags were placed in front of the building to represent 100 victims who were allegedly killed by suspects that had been released on multiple felony bonds in recent years.

Sharon Shepard was one of the many family members who filled the meeting room Sunday evening.

The Shepard's are one of the families praying for justice. She said three of her nephews have been killed in separate incidents of gun violence. All of the cases remain unsolved.

She said their first loss was Edmond Ford who was shot and killed in 2016. Three years later, in 2019, Joseph Billie was shot in the middle of Hondo Street. Houston Police still don't know what happened before Billie was shot.

Then, last month Shepard said Clarence White was returning home when an alleged intruder shot and killed him.

"Emotionally, I'm hurting inside," Shepard said. "I don't know what to do or what to say now to my sister and my brothers and my cousin's mom. What do you say to them?"

According to HPD, the homicide rate in the city of Houston has increased 30 percent since last year. As of Friday, there have been more than 340 homicides in 2021 compared to 262 homicides this time last year.

National Day of Remembrance was dedicated to honor murder victims and provide support and services to their families.

Shepard hopes someone will do the right thing and give Crime Stoppers the tip they need to help solve these cases.

"Have faith," Shepard said. "That's all we have right now. That someone will come forth one day to give us closure in these cases."

Anyone with any information on the cases shown or mentioned, you can anonymously report tips to Crime Stoppers at 713-222-TIPS and you may receive a reward up to $5,000.