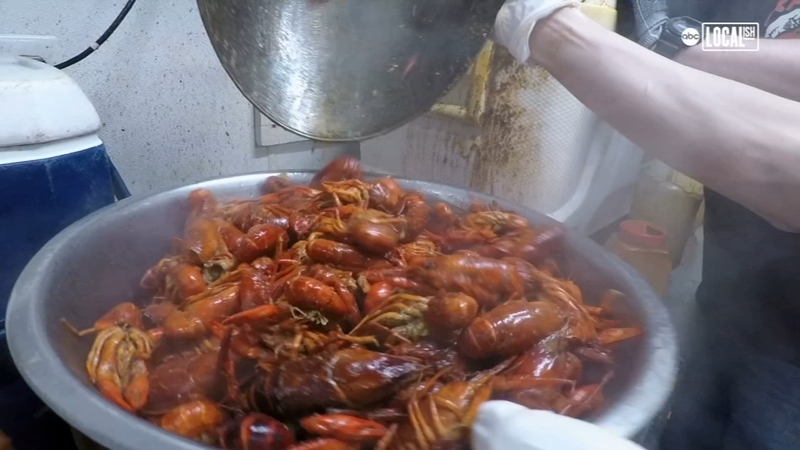 It's crawfish season! Check out these Houston restaurants

HOUSTON, Texas (KTRK) -- Crawfish season has finally arrived in the Houston area and there are several places ready to serve them up!

Despite the pandemic, you can still get your hands on delicious mudbugs at home thanks to local restaurants that offer take out and delivery.

Here are just a few spots that have opened the drive-thru windows and screen doors as the boiling pots simmer.

In Santa Fe, Pook's Crawfish Hole is kicking off its 10th crawfish season Thursday at 4 p.m.

The Crawfish Shack in Crosby opened its drive-thru Wednesday and will serve up sacks of the bugs during limited hours. The boiled crawfish is selling for $8.95 per pound there.

Cold weather hindered production in south Louisiana this past year, KPLC-TV in Lake Charles reports. The aquaculture industry contributes well in excess of $150 million to that state's economy annually, according to Texas A&M Agrilife Extension.

While crawfish is, without question, a treat with Louisiana origins, Houston's consumption has been widespread since at least the 1990s, according to writer John Nova Lomax's 2017's dive into the delicacy. Other accounts point to 1976 as the mudbug's debut on Houston tables. The oil boom of the 70s brought a surge of Louisiana workers to the Bayou City, and they brought their passion with them. A number of reports point to Port Arthur's A.J. Judice Jr., known as the Crazy Frenchman, who first sold them at his store there in 1963.

Crawfish are freshwater crustaceans that look like small lobsters. They are native to small streams, ditches and marshes and are grown commercially in rice fields.

If you want to learn more about crawfish and how to boil them at home, welovecrawfish.com has a wealth of resources about suppliers, FAQs and recipes.

Crayfish or crawfish? Here's everything you need to know about the southern delicacy.