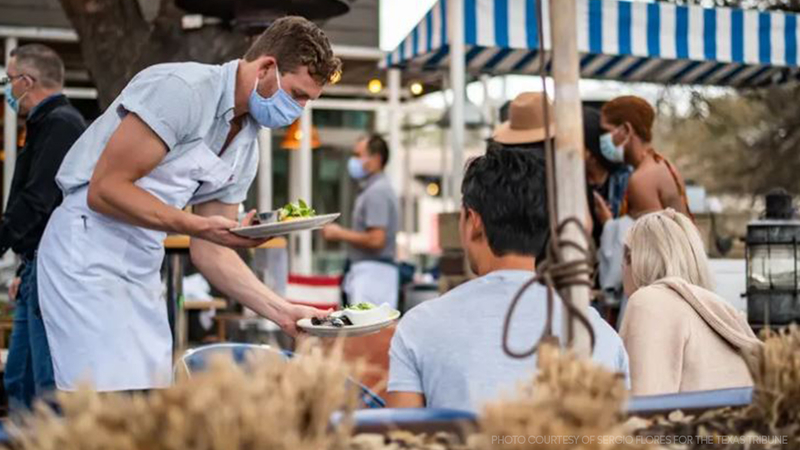 TEXAS -- More than a month has passed since Gov. Greg Abbott ended virtually all statewide restrictions related to the coronavirus pandemic. Nationwide, new coronavirus cases are on the rise as new variants of the virus spread. And about four-fifths of Texans are not yet fully vaccinated.

But at least for now, the most dire predictions of a new major wave of cases in Texas have not come true, prompting a mix of theories from public health experts.

Those experts caution that a major increase in cases could still come and it may still be too early to tell whether Abbott's decisions to lift the statewide mask mandate and allow businesses to fully reopen could prompt a new wave of infections. Still, daily new cases and the positivity rate have leveled off over the past month, while deaths and hospitalization have gone down substantially.

Experts point out that vaccination is ramping up, many businesses are still requiring masks and there are unique factors impacting individual metrics - like a drop in demand for testing that is driving down raw case numbers.

They also emphasize that, especially at this point in the pandemic, a stabilization of such metrics, or even a modest decline, is not exactly cause for celebration.

"I think we could've been even lower at this point in time," if not for Abbott's latest decisions, said Dr. Luis Ostrosky, an infectious disease specialist at UTHealth's McGovern Medical School in Houston. "The fact that we're sort of stable is not necessarily good news - because we're stable at a very high level. It's like everybody saying you're at a stable cruising speed - but at 100 miles per hour."

Abbott's decision to end most statewide restrictions went into effect 35 days ago, on March 10. The seven-day average for daily new confirmed cases was 3,020 on that day; it was 2,456 on Tuesday. The seven-day average of the state's positivity rate - the ratio of cases to tests - was 6.24% on March 10; it was 5.89% on Monday. (The latest positivity-rate figures are considered preliminary and subject to recalculation as more test results come in from the date in question.)

Deaths and hospitalizations, which lag new cases, have seen steeper drops since March 10. The seven-day average of new daily deaths was 187 on March 10; it was 64 on Tuesday. There were 4,556 Texans hospitalized with the virus on March 10; there were 3,002 on Tuesday.

The four key metrics are way down from peaks earlier in the year, when the state was seeing daily new caseloads approaching 20,000, a positivity rate that went above 20%, hospitalizations that topped 14,000 and weeks of more than 300 deaths per day.

At the same time, vaccinations have climbed steadily as the state has expanded eligibility, opening up to everyone age 16 and older on March 29. The percentage of fully vaccinated Texans more than doubled from March 10 to Monday, when it was 1 in 5 Texans.

"Overall, it's great news," said state Rep. Chris Turner, the House Democratic Caucus chairman who has been critical of Abbott's decisions throughout the pandemic. "I'm very glad that so far the governor's decisions have not resulted in an increase in cases."

"Clearly the massive investment in vaccines and the improved distribution of vaccines across the country since President Biden came into office is having a tremendously positive impact on protecting people from COVID-19," Turner added.

Despite the numbers in Texas, it has been an open question as to how long it takes after the lifting of restrictions to see a spike in the data. The incubation period for the virus - the time between when someone is exposed to it and when they start showing symptoms - is believed to be two to 14 days, and not everyone immediately stopped wearing masks and visiting fully reopened businesses on March 10.

Meanwhile, the rise of more transmissible variants across the country has added another threat. Average daily infections rose by almost 7% nationwide over the past week as officials race to vaccinate people as quickly as possible. Those efforts might be hampered in the short term after Texas paused the use of the Johnson & Johnson vaccine so federal health authorities could review six reports of blood clotting among 6.8 million doses nationwide.

The nation's top infectious disease expert, Dr. Anthony Fauci, was asked in a TV interview last week about Texas' numbers and gave an uncertain response about what was driving them at the moment. Speaking with MSNBC, he said "it can be confusing because you may see a lag and a delay because often you have to wait a few weeks before you see the effect of what you're doing right now."

"We've been fooled before by situations where people begin to open up, nothing happens and then all of a sudden, several weeks later, things start exploding on you," Fauci said. "So we've got to be careful we don't prematurely judge that."

Until recently, Abbott has been restrained in openly touting the Texas trend lines, instead focusing much of his celebratory public messaging on vaccination progress.

"We absolutely are not declaring victory at this time," Abbott told Fox News on Sunday. "We remain very vigilant and guarded and proactive in our response, but there's simple math behind the reason why we continue to have success," he added, citing the combination of increasing vaccinations and the "acquired immunity" among Texans who have already had the virus and recovered from it.

However, Abbott went on to make a dubious claim: that the state is "very close" to herd immunity, or the point at which enough people have been vaccinated or have already become infected - and recovered - to protect the rest of the population. Abbott said that despite acknowledging in the same response that he does not know what the herd immunity threshold is for the virus, an uncertainty echoed by the public health community.

Fauci has said herd immunity against the coronavirus could require as much as 90% of the population to be vaccinated. Ostrosky said "classically in epidemiology, we talk about herd immunity in the 60 to 80% range."

In any case, experts agree that Texas is not anywhere near herd immunity. As of Monday, just 20.1% of Texans had been fully vaccinated and 9.72% had tested positive for the virus. There could be overlap between the two groups - the Centers for Disease Control and Prevention recommends that people who had the disease get a vaccine.

In the meantime, though, public health officials are keeping a close eye on the core metrics and whether they creep up as more Texans take advantage of the end of the mask mandate and businesses reopening at full capacity. Ostrosky acknowledged that so far, the numbers are "not what we were expecting."

"The question is how come and the answer in my mind is vaccines," Ostrosky said. "I think we're making really good headway with the vaccination program. We were sort of aggressive moving through the stages [of eligibility]."

"I think our saving grace was the vaccines despite the not-so-good choices that some of our fellow Texans are making" with regard to practices like masking, Ostrosky added.

Jaquelin Dudley, the associate director of the LaMontagne Center for Infectious Disease at the University of Texas at Austin, said the underreporting of previous cases could be masking the extent to which the state's population is already immune. Combined with the vaccination effort, "we're definitely impairing the ability of the virus to spread" at this juncture in the pandemic, she said.

She and other experts also cited anecdotal evidence that most businesses, especially in the state's major metropolitan centers, are still requiring masks despite the lack of statewide mandate.

"I think it's too early to drop mask mandates, and that's really been left up to the individual businesses," Dudley said. "Certainly the places that I know of are still requiring masks, and I'm sure that's helping."

One of the strongest arguments to keep wearing masks is the rise of variants, Dudley said. There are currently five "variants of concern" in the United States, according to the CDC, which is studying how effectively current vaccines address them.

When it comes to steeper drops in deaths, Dudley said she thinks the state has "just got a lot better about treating the infection" after confronting the pandemic for over a year.

Ben King, a clinical assistant professor and epidemiologist at the University of Houston College of Medicine, said the downward trend in both deaths and hospitalizations could reflect Texas' prioritization of the highest-risk population - the elderly - for immunization.

Both Texas and Florida made national headlines late last year for bucking CDC guidance and prioritizing older people over essential workers in their vaccine rollouts. And Abbott further prioritized older Texans with his Save Our Seniors initiative, which has deployed National Guard troops to help vaccinate homebound seniors. Over 100 counties have taken part in the the program, which has been underway for six weeks.

There are also simple statistical truths behind the latest numbers. Since earlier this year, the number of tests administered has dropped, and with it, the number of cases identified. The falloff in testing is not for a lack of supply, according to experts, but due to an apparent lack of demand as Texans fatigued by the virus see less of a need to get tested in the pandemic's final stages.

While the positivity rate has remained stable, experts said the end of the pandemic is especially not the time to let up on testing. King said Texas' plan to provide state-licensed summer camps with COVID-19 rapid antigen tests is "exactly the way we need to be thinking."

"We want to see testing go way up, but we also want to see cases go way down," said King, who agreed with Ostrosky that any flatlining of metrics at this point is "not what we need."

"We have to be crushing [the curve] at this point," King said. Abbott's latest decisions "could be just stretching out the flatness of the curve, which just makes it harder to get to zero, which is obviously what we all want."

Experts also point out that the changing of seasons could be keeping the numbers relatively low. As the weather gets warmer, people are gathering more outside - and not inside, where the virus is more likely to spread.

The experts, though, are pleading with the public to still take the pandemic seriously, even as the numbers look good and the statewide restrictions fall further in to the rearview.

"If we don't focus - and all we're asking for is two more months ... - we're really gonna lose all that ground we gained," Ostrosky said.