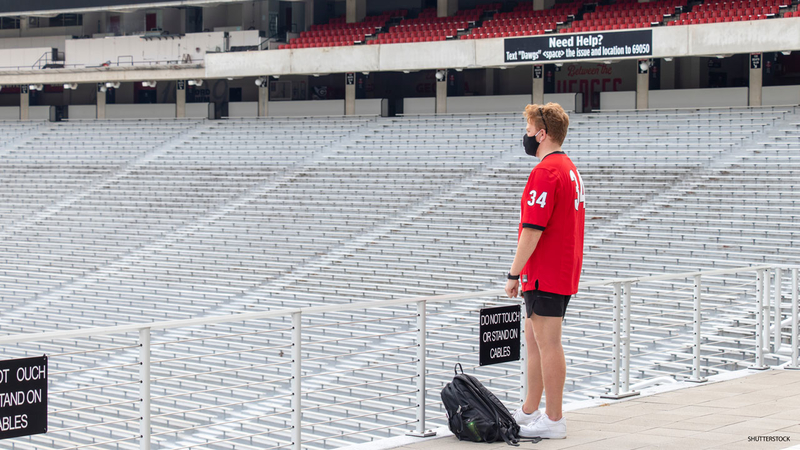 Athletics officials at Texas universities spent months planning for a fall football season during a pandemic. As conferences deliberated how teams could safely compete in the age of coronavirus, proponents hoped enhanced coronavirus testing for athletes would ease any lingering doubts.

It worked. Within the month, five major Texas football programs are slated to play. In football and other high contact sports like soccer and volleyball, athletes will be tested three times a week, according to directives from the Big 12 Conference and Southeastern Conference.

For teams competing on a Saturday, that might mean a test Sunday, another Wednesday, and a final, rapid-results test Friday, said Kenny Boyd, a Baylor University senior associate athletic director. Non-conference opponents must also adhere to testing protocols that match conference standards.

Conference and school officials say enhanced testing for sports is necessary to protect athletes, support staff and the teams they compete against. It's an impressive regimen, public health experts agree. But that same level of testing is not available to other Texas college students - even those living in high-risk settings like dorms.

Texas A&M University reported 327 new positive tests the week ending Aug. 29, down slightly from the 371 it reported a week prior. Between Sept. 1 and Sept. 3, The University of Texas at Austin reported 103 new positive cases, more than doubling in three days the amount it reported for all of August. Baylor also reported 101 new cases during that time frame.

Public health experts say schools need to dramatically ramp up testing in order to catch "silent spread" fueled by students who are infected but don't have symptoms.

In Texas, that means colleges should be testing everyone as much as the athletes, said Diana Cervantes, an epidemiologist at the University of North Texas Health Science Center.

"If you really wanted to find out what's going on ... you're going to have to do more intense and more frequent, routine testing," Cervantes said. "Because right now, all of the schools and universities and public schools, they're really relying on symptomatic screening. They're not doing a lot of testing."

Many colleges in Texas offer diagnostic testing for students, faculty and staff who have symptoms of the virus. But routine testing for those without symptoms or exposure to a positive case is less prevalent, even as the CDC estimates 40% of COVID-19 infections are asymptomatic.

A. David Paltiel, a professor at the Yale School of Public Health, said frequent testing for asymptomatic spread is crucial to controlling college outbreaks. Given the infectiousness of the coronavirus, schools should be testing everyone every three or four days, he said.

"By far, the most powerful variable that administrators control is testing frequency," Paltiel said. "If you're only springing into action when symptoms emerge ... it's like a fire department that only responds to calls when the house is already known to have been burnt to the ground."

As Texas continues to report thousands of new cases a day, some colleges in states with fewer infections have launched aggressive testing campaigns. The University of Illinois Urbana-Champaign requires students, faculty and staff to be tested twice a week.

Among Texas schools that have rolled out plans to catch silent spread, officials vary on how much testing to offer, who exactly should be tested and whether that testing should be mandatory.

Baylor University stands out as one of the few Texas institutions to mandate participation in testing. The private Christian university is requiring all students, faculty, staff and vendors to test if selected, warning that failure to comply may result in disciplinary action. Unlike other Texas universities, Baylor also required a negative test from all students and employees before they returned to campus.

UT-Austin, Texas A&M University and Texas Tech University encourage participation in asymptomatic testing but stop short of requiring it. Texas Christian University does not offer routine testing for students without symptoms, according to The Dallas Morning News.

Cervantes worries a voluntary approach could allow outbreaks to go undetected, especially if some students dodge the invitation to test.

"If it's optional then people could self-select themselves out of that," Cervantes said. "Let's say I think I had a high-risk exposure and I think that testing positive is going to mean something detrimental to me, maybe I'd decide not to get tested."

Texas Tech is offering walk-up testing on campus for students, faculty and staff, including those without symptoms or exposure to the virus.

In College Station, Texas A&M is randomly selecting students to participate in saliva-based testing throughout the semester. Faculty and staff members are not included, said Shawn Gibbs, dean of A&M's School of Public Health.

"Faculty and Staff are not part of the random testing program as they represent a population that is less likely to be asymptomatic, more likely to seek testing if they develop symptoms, and less likely to participate in riskier behaviors that could expose them to COVID-19," Gibbs said in a statement, adding that the school has made testing freely available to employees who have symptoms or are close contacts to someone who has tested positive.

The public flagship launched the first round of random testing Aug. 21, selecting more than 5,000 students - about 7% of its student population. The testing is voluntary for now, but if the school is not satisfied with the response rate, it says the next round will be mandatory.

UT-Austin plans to test 5,000 students, faculty and staff members who do not have symptoms each week. The saliva-based testing is voluntary and directed toward critical populations, such as students in dorms, but anyone is allowed to participate every 14 days, University spokesperson J.B. Bird said. On Sept. 4, the University reported 36 clinical positive results among the 2,770 tests of asymptomatic people it has conducted since the week of Aug. 23.

Bird said UT-Austin has the capacity to increase the number of asymptomatic tests through the semester "and will adapt if the data indicate that this would be a better strategy for tracking, tracing and limiting transmission."

"With the reduced number of students in Austin, our capacity of up to 5,000 proactive community tests per week offers the chance to survey a significant percentage of the community," Bird said.

The protocol for athletes, school officials say, seems to be successful at preventing clusters of infection, though it remains to be seen whether testing for Texas campuses at large will provide that kind of mitigation. Plans to press forward with major college football in Texas were dealt an early setback Friday after TCU canceled its first football game due to COVID-19.

Paltiel said any plan dependent on random or voluntary testing is "not good enough."

"Young, asymptomatic individuals are fueling the spread of this pandemic," Paltiel said. "You have to test everyone because you're really looking for those silent spreaders, the kids who feel just fine."