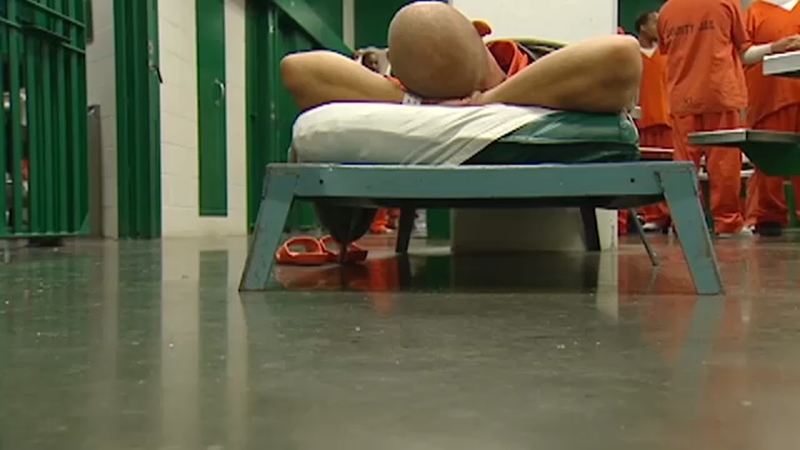 HOUSTON, Texas (KTRK) -- A day after announcing plans to do so, Harris County Judge Lina Hidalgo signed a 14-page order setting up the release of up to 1,000 non-violent inmates.

Hidalgo called it "a decision necessary for the health and safety of the community." In announcing the order, Hidalgo again called the Harris County Jail "a ticking time bomb."

On Wednesday, she told reporters an outbreak in the jail could overwhelm the public health system, taking hospital beds and ventilators from the general public.

In a Tuesday afternoon news conference, Hidalgo said they are non-violent inmates awaiting trial on felony charges, without prior convictions on violent crimes.

"Public health experts have made it clear that it's a dangerous situation," Hidalgo said. "The cramped conditions there make it impossible to enforce social distancing."

Trying to stay ahead of critics, Hidalgo said there is "no room for politics" in this matter.

There is not yet a list of offenders who would be considered for release as the order is still not finalized. The judge and her attorneys say anyone under domestic violence protective orders, felony DWI suspects and accused home and business burglaries would not be eligible for release.

The proposed order steers clear of an executive order signed by Governor Greg Abbott that banned the release of any violent criminals. The proposed Harris County order doesn't include them.

Once a list of inmates is created, the District Attorney, District Court Judges, and pre-trial services will have 32 hours to review the list and raise objections. A draft discussed Tuesday only allowed eight hours for a review. The county says once that is complete, it aims to release up to 250 inmates per day.

Judge Hidalgo did say she consulted elected leaders and police chiefs. Houston Police Chief Art Acevedo was apparently not one of them.

Acevedo told ABC13 in a statement, "As the largest user of the Harris County Jail, I have not discussed the plan with the judge, nor have I been given any specifics." Noting an 18.9% increase in burglaries in the last two weeks, Acevedo tweeted, " I hope people who burglarize vehicles, residences and buildings aren't released in large numbers."

RELATED: HPD chief says he was not consulted over inmate releases

Opposed to the plan, Houston Police Officers Union President Joe Gamaldi told ABC13 Tuesday night, "Our officers already have their hands full with this pandemic, and now you're going to add 1,000 criminals on top of us? You're not helping us!"

Adding to the complexity of a plan, a group of lawyers representing thousands of inmates at the jail has filed court documents asking a federal judge to release even more inmates to avoid a public health catastrophe.

In a phone hearing Tuesday, US District Court Judge Lea Rosenthal said she would give Harris County until Friday to show progress towards releasing inmates before taking any further action.