Houstonians struggle to get help with unemployment offices closed 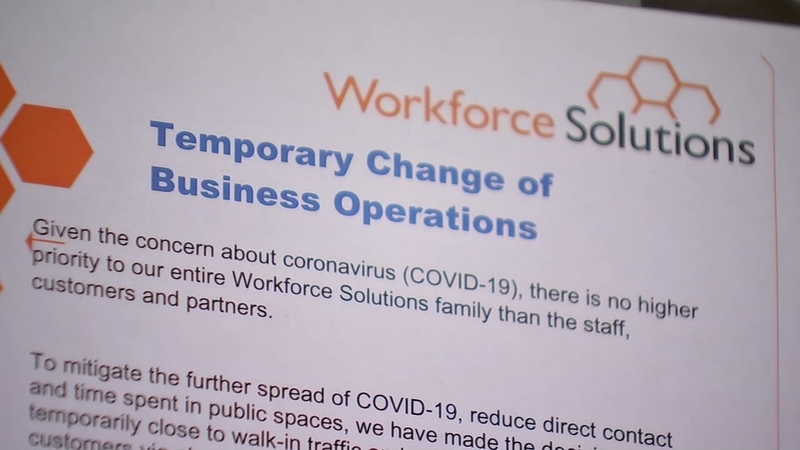 Houston's unemployed having a tough time getting help

"Never, never never," said University of Houston Economics Dept. Chair Dr. Dietrich Vollrath of the numbers. "There was an expectation that they would be grim. This was on a scale that was not even conceivable until two weeks ago."

Earlier in March, the state reported a record unemployment rate, which was just under four percent.

The stay-at-home emergency order, which designated which businesses were essential and which were not, was expected to have consequences, but the reality surpasses that. Some restaurants that are operating on take-out service may not weather the crisis generated by the COVID-19 pandemic. Compounding the loss of jobs is that a lot of those no longer working haven't been able to file their claims with the Texas Workforce Commission.

Because of the limit on how many people can be in the same place at the same time, the state temporarily closed their Workforce Solutions offices. Pedro Fernandez drove to one in southeast Houston on Thursday. A ride share driver who's been without customers since the virus spread into the Houston area, he's applying for unemployment benefits.

"I can't get through on the phone, and when I went online, their server was down," he said. "I'm more scared of the virus than being unemployed, but I need to support my family," he said.

Looking for work? Here are companies now hiring in the Houston area!

The state has a notice on its website that online traffic is down between 10 p.m. and 8 a.m., which it says is a better time to apply online. The phone lines remain an issue, though the agency has hired more staff to handle the unprecedented volume.

"Every state is going through the same thing," said Dietrich. "No one could have been prepared for this."

A large share of the unemployment numbers for Texas belongs to Houston. The oil industry, which is a large part of its economy was hit with a steep price decline, because of a price and production showdown between Russia and Saudi Arabia. It still figures into the jobs lost.


The one cushion for those who lost their jobs during the COVID-19 crisis is that the federal emergency package provides $600 per week on top of state unemployment benefits, which will be extended from the time the job loss occurred.

"It's really important for people who are out of work because of this to apply for those benefits," said Dietrich. "It may be more money than they expect."

He expects a recovery to begin over the summer. "It's going to be bad before it gets better," he said. "But the expectation is that as fast as the economy went down, it will rebound with a roar. It's the other part of a whiplash."