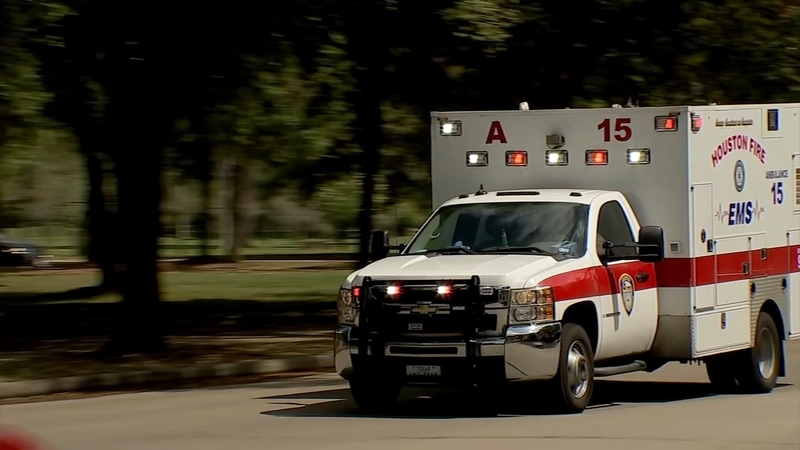 HOUSTON, Texas (KTRK) -- With a bottle of hand sanitizer in his pocket, and ever present COVID-19 concerns on his mind, the president of the Houston Firefighters Union told 13 Investigates his members are worried.

"We don't have enough resources, as it stands today, to last through this pandemic as it changes." Marty Lancton explained Tuesday, pointing to a shortage of Personal Protective Equipment (PPE) for firefighters and paramedics.

Regardless of their COVID-19 status, patients with flu-like symptoms require first responders to wear gloves, a mask, eye protection and a full gown. There is a nationwide shortage for some of it. On Tuesday, the Houston Fire Department had 500 gowns. About 50 are used on an average day, according to the department.

Houston Fire Chief Sam Pena said many more are on order and expected to arrive well before the existing supply runs out. Departments across the Houston-area and the nation are hoping for the same result.

In a press release Tuesday, Houston Fire Chief Sam Pena said, "As a standard practice we make every effort to purchase, maintain and provide our personnel with the PPE that meets or exceeds the industry standards. That has always been the case, and it is true now. No matter what strain of flu we may be dealing with, we shall always take precaution to protect our firefighters, EMS personnel and first responders."

As proof the problem is not limited to Houston, Montgomery County officials approved an emergency allocation to buy gear wherever it can be sourced. Additionally, emergency management officials in Montgomery County, say the State of Texas may soon release a stockpile of the PPE to local departments.

As the department deals with the gear issue, a group of about a dozen Houston Fire Department inspectors went through work at home requirements this week. Around 1 p.m. Monday, a Chief in the department's Life and Safety Bureau emailed the group telling them, "due to possible exposure at the HLSR (Rodeo). You are to work from home until further notice."

On Tuesday, after seeing the email, 13 Investigates asked about the work at home status. Forty-three minutes later, the group got another email telling them, "The exposure risk for personnel assigned to the Rodeo has been evaluated by Infection Control. They have determined the risk does not rise to the level of that which would require additional testing. All personnel are to notify their Supervisors and resume their normal Inspection routine."

The confusion extends to testing for firefighters in possible contact with the illness. When asked specifically about where Houston firefighters could go Tuesday to be tested, Lancton told us, "I couldn't tell you. We have not been told."

The Houston Fire Department distributed protocols Tuesday suggesting low-risk exposures don't need testing. Those are exposures with no flu-like symptoms or when PPE is used effectively.

In those low-risk scenarios, firefighters are returned to duty and told to self-monitor for symptoms. If symptoms develop, they are elevated to a higher risk and put on in-home self-quarantine. The health department rules say they must be in a separate bedroom.

It is not enough for the union president, Lancton, who suggests firefighters and all first responders should get priority testing.

"The testing has to be there for our first responders that are out there every day dealing with potential patients. We've called the Governor's office to ensure that the firefighters in Texas and in Houston go to the top of the list."
Report a correction or typo
Related topics:
houstonted oberg investigatescoronavirustexasu.s. & worldfirefighters
Copyright © 2021 KTRK-TV. All Rights Reserved.
TED OBERG INVESTIGATES
Crime is so bad in 1 neighborhood, parents don't let kids look outside
Mayor Turner drops support for controversial housing deal
Meeting to expose housing director exposes little about housing deal
Turner defends record in face of questions over housing deal
TOP STORIES
$75,000 reward now offered to find ambushed deputy's killer
Remains found at park in search for Brian Laundrie; not clear if human
Federal investigators at site of MD-87 plane crash in Waller Co.
Katy husband gets prison for killing his wife and burning body
Reminder, Astros fans! Today's Game 5 is an afternoon affair
Hostage shot multiple times during standoff in Atascocita
Crime is so bad in 1 neighborhood, parents don't let kids look outside
Show More
Big warm up ahead but another cool front in the forecast
Carlos Correa gifted 'Mr. October' hat from legend Reggie Jackson
US' first openly transgender four-star officer sworn in
How to watch the Orionid meteor shower tonight
US expected to authorize Moderna, J&J boosters as soon as today
More TOP STORIES News