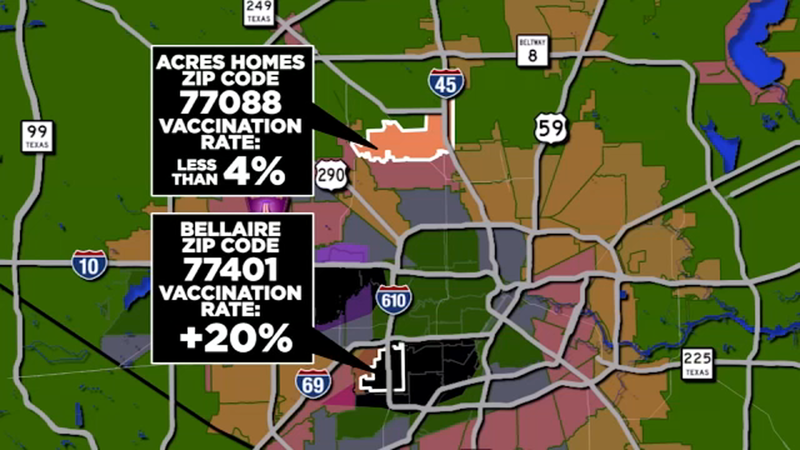 HOUSTON, Texas -- Before COVID-19, Katrina Barlow was prepared to retire at 55, was driving her dream car, had recovered from cancer and was able to support her disabled mother. After a year of living through the pandemic, Barlow is spending her savings on keeping her small business in Pearland, Salons on the Lake, afloat.

"I have had my business for 16 years. I paid taxes; I did everything right, and I didn't get government help," Barlow said.

While COVID-19 has affected everyone, people of color-particularly Hispanics-have had the majority of cases, hospitalizations and deaths. In Houston and Texas, Hispanics lead in COVID-19-related deaths, according to the Texas Medical Center and Texas Department of State Health Services.

The Hispanic community is one of the highest uninsured populations, leading to more chronic conditions, said Elizabeth Perez, director of the Office of Communications, Education and Engagement at Harris County Public Health.

"It's this chronic underbelly of health disparities that exist in the community," Perez said.

The momentum gained by the Black middle class in the last 10 years has been affected by COVID-19, even in the Houston area, said Farrah Gafford Cambrice, associate professor of sociology at Prairie View A&M University.

Black people lead the nation in COVID-19 deaths, according to The COVID Tracking Project.

"It's definitely going to come with some struggles for some time to come, in terms of health care, economic opportunities and jobs," Cambrice said.

"African American unemployment is at the double digits," Howard said.

Howard and Perez also both commented on how the virus has spread more widely among essential workers, many of which are people of color. Essential workers may also be less likely to speak out against unsafe practices if they are undocumented, for fear of losing their job, Perez said.

"They're not saying, 'Hey, we should really wear masks,' when thinking, 'I need to put food on the table," Perez said.

Pearland nonprofit Christian Helping Hands has had a spike in people needing necessities over the pandemic, founder Hita Dickson said.

"I'm not sure if it is unemployment, but you can be sure people are hurting for food if they are willing to travel 20 miles or 30 miles for a food bank," Dickson said.

Cambrice said she is concerned about unemployment after the pandemic, as some jobs lost may not be available, she said.

"There's going to be this constant instability and this unknown," Cambrice said.

Chandrakanth Vemula, director of business at Internal Medicine Associates of Houston, said he is concerned about virus spread for people of color and lower-income communities.

"If you see the composition of minority communities, they tend to socialize among themselves. The people are very wired to the community," he said.

The close proximity of communities of color, as well as lower-income communities, is a concern in the spread of the virus, Cambrice and Perez agreed.

"When COVID-19 really took off, we knew this idea of social distancing was going to be problematic," Cambrice said.

While the virus has spread between lower-income communities and people of color, Vemula said he is concerned those same communities will have less access to the vaccine, which is widely viewed as a light at the end of the COVID-19 tunnel.

"People who are more technically savvy are able to get appointments easily, and that disparity has been a challenge," Vemula said.

Besides technology, another issue is location. Vaccine hubs are limited and are often in areas that communities of color do not frequent, Vemula said. The city of Pearland runs a vaccination site at the Pearland Recreation Center; there is also a Federal Emergency Management Agency vaccination site at NRG Stadium.

Perez has lead an initiative at Harris County Public Health to build trust within the community. Security at testing sites is necessary, but can deter people from getting tested for COVID-19, particularly if a person is undocumented, Perez said.

"If you drive up and see a law enforcement officer, it can cause some hesitation," she said.

Cambrice echoed the concern that there is a lack of medical care access in lower-income communities and communities of color. In Houston, there are pharmacy deserts, which could play into the availability of the vaccine, Cambrice said.

"The truth is, it's not race-it's racism and structural inequality that creates that kind of environment for Blacks to be exposed to more illnesses and disease," she said.

In the past decade, Cambrice has seen more business owners who were people of color in the Houston area. Cambrice lived in Pearland and said she was encouraged by the young Black professionals in the area.

"I really felt so blessed to have that atmosphere," she said.

According to 2019 data from the U.S. Census Bureau, nearly half of the companies in Brazoria County were owned by minorities in 2012. When COVID-19 hit, Barlow was forced to close Salons on the Lake in Pearland for three months because her salon was not an essential business. However, business did not improve once she reopened.

"I opened my doors, but no one came," she said.

Barlow did not qualify for Payroll Protection Program loans but ended up receiving $6,300 in loans and grants to keep her business running. Now, she is funding her business out of her own pocket.

"I wish there was some type of resource for people like myself because I am sure I speak for millions like myself who did not qualify," Barlow said.

Barlow is not the only small business owner in this situation, Cambrice said. The progress of people of color is going to be affected by the virus long-term, Howard and Cambrice said.

"We're not starting from an equal base, and COVID has exposed that," Howard said.