Tale of 2 Tides - is bargain detergent really a deal? 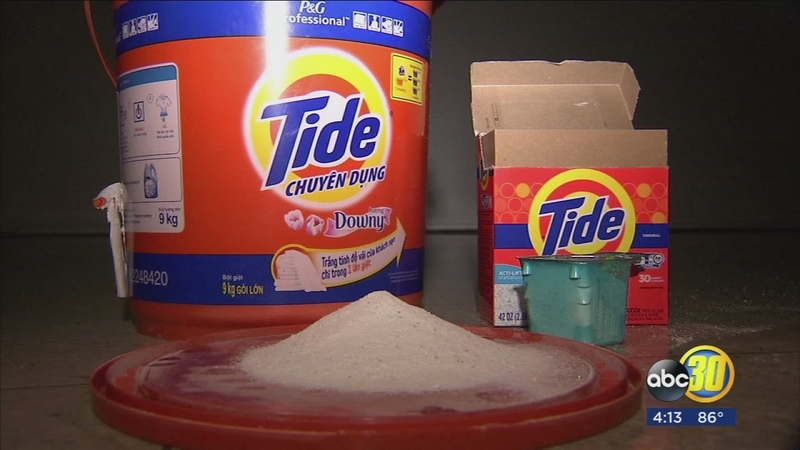 Smart & Final's five-gallon bucket of Tide laundry detergent sells for $24. Walmart's biggest box is about one-third the size for $13, so the bucket is quite a bargain - about a 40 percent discount. But a closer look suggests it may not be exactly what you think.

"I thought about buying it, and then I did my research," shopper Alex Pike said.

Pike found the bucket a couple months ago and thought it was a great deal, but she decided something looked unusual, so she gave it a closer look.

Some of the writing is in Vietnamese. When we peeled back a sticker, we found out it's only supposed to be sold in Vietnam. Procter & Gamble produces Tide. And when people started asking about the big buckets on social media, the company said its products don't come in five-gallon buckets for retail sale.

"Being a cloth diapering mother who goes through detergent like crazy, having a five-gallon bucket for real cheap was a good deal," Pike said.

A spokeswoman told ABC13's sister station Action News they have two issues with the big buckets - one is the possibility of counterfeit sales. Police in LA arrested several people last year for buying and selling fake Tide in orange five-gallon buckets.

The other is a Procter & Gamble product intended for professional use in Vietnam, but it's hitting store shelves here in the United States.

The spokeswoman says "P&G does not sell or authorize anyone else to sell products in five-gallon buckets to the general public."

A Smart & Final spokeswoman said the company can assure customers the product is genuine. They say it "is legally imported for distribution in the United States and is safe to use."

FoodMaxx sells the same buckets, and they also say they import the buckets from Vietnam. But Tide's makers say the product is meant to be used in Vietnam where the washing conditions are different than in the US, so the product may not be what American consumers are used to buying.

So, we wanted to see how it compared to this typical Tide detergent.

We asked the chemists at BSK Associates to find out whether the products are the same on a molecular level. We checked for phosphates, a powerful cleaning agent companies stopped using in the U.S. because of environmental concerns.
EMBED More News Videos

Action News bought Tide in the five-gallon bucket and Tide in a smaller container and asked chemists to examine them down to a molecular level and see what they found.

"This one also claims there's no Orthophosphate 38, so we're actually going to test the levels," Ian Huh with the lab said.

And they checked for other possible differences as well.

Procter & Gamble said they don't control the supply chain for the Vietnamese product, so the formula may be different and consumers like Pike may not get the results they usually get from Tide.

Action News Anchor Corin Hoggard went to Smart & Final and bought Tide in the five-gallon bucket and Tide in a smaller container and asked the chemists to examine them down to a molecular level and see what they found.

They started with a couple assumptions.

Manufacturers eliminated phosphates in American detergents more than 20 years ago because of environmental concerns, but the chemical compounds are not illegal in California, and they're considered a strong cleaning agent.

But the spectrophotometer showed no phosphates in either product. In fact, it showed the bucket and the box both contained the same elements and compounds but in different amounts.

"There was six times more surfactin in the five-gallon bucket," Huh explained.

Surfactins are cleaning agents. In this case, the analysis showed a high amount of sulfactins in the Vietnamese Tide. The chemists say the higher levels mean Tide from the bucket might have a different effect on your clothes than the domestic Tide.

"It can result in potentially taking color out from your clothes," Huh said.

The American Tide had more aluminum in it, which chemists say is often used as a water softener. So, with those results in mind, is the bucket a bargain to Alexandria Pike?

"I would not go back and buy that bucket, knowing that it could dull your clothes because, in the long run, I'm not just washing my clothes," she said. "I'm washing clothes for three or four other people."

The chemists, on the other hand, wanted what was left in the big bucket - but just for their whites.