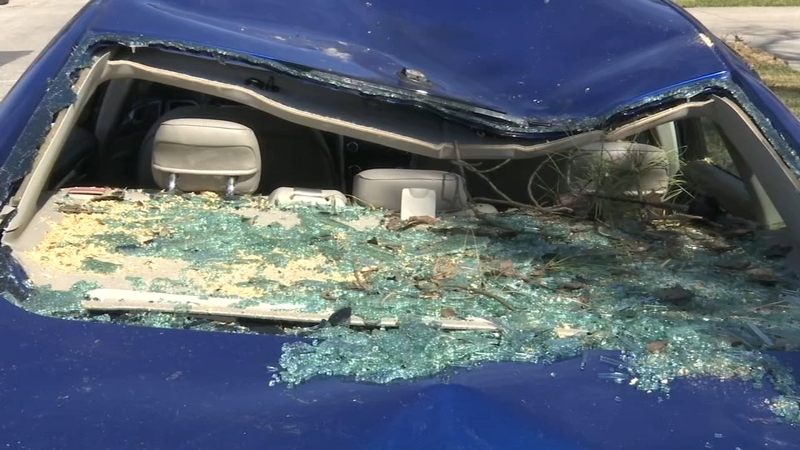 City of Houston caused tree to fall and crush a car, owner says

HOUSTON, Texas (KTRK) -- A college student is trying to find new transportation after a large tree fell on her car.

People in the neighborhood near I-45 and Wayside say the city of Houston was doing work on a tree days before it suddenly started leaning. Then on Saturday, residents say high winds knocked the tree over crushing a car on the street below and blocking the roadway.

The large tree landed on the car roof smashing out nearly all the car windows. A tree branch also pierced a hole in the windshield of the passenger side.

"We all ran outside. The neighbors ran outside and it crushed my car. It happened so quickly," said Sharlow.

Sharlow was in the neighborhood attending a first birthday party for her friend's son.

"She was the first one to show up on time, at 2 p.m.," said Maria. "She parked on the street. She's been to my house multiple times. She's seen that tree before. Within 15 minutes the party literally started. We ran out and she was like, 'That's my car.'"

The tree owner didn't want to go on camera but told ABC13 she reported a sewer backup issue in November. She said the City of Houston came out and began cutting roots around the tree which was interfering with the pipes.

She thought the issue was fixed, but then the tree started leaning.

"For a couple of days we were cautious because it leaned over but it stayed like that," Maria explained. "It didn't keep leaning. It just shifted."

Jones said an investigation found there were roots in the wastewater line. Houston Water contractors made repairs in January 2021 and some roots were mistakenly cut during those repairs.

When we asked who would be responsible for the damage to Sharlow's car, Jones said Houston Public Works contractors will provide insurance information to the vehicle's owner for repairs.

The 23-year-old says she is waiting to hear if her car is totaled. She said she works full time while going to school and she doesn't have money for a rental car and shouldn't have to foot the bill for repairs or a replacement.